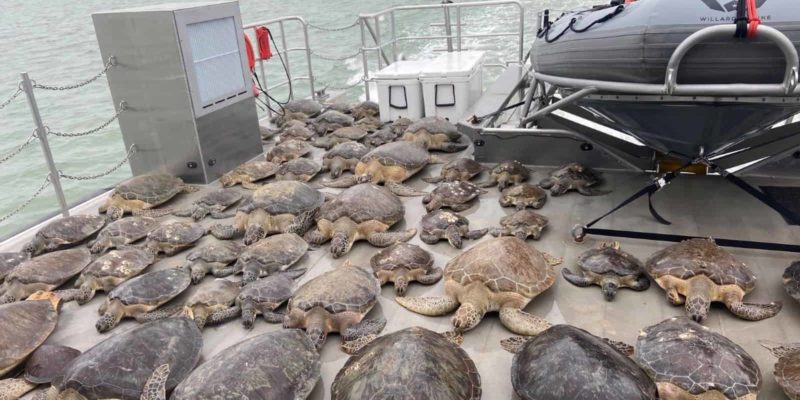 
Last week’s winter storm in Texas not only put humans at risk; low temperatures also threatened thousands of sea turtles. The nonprofit Sea Turtle, Inc in South Padre Island, Texas, and volunteers helped rescue the animals. They took in more than 5,000 cold-stunned turtles and eventually released more than 2,200 after rehabilitating them.

Sea turtles use the normally warm waters of South Texas to regulate their body temperature, as they are cold-blooded. Sudden drop in temperatures can cause a “cold stun,” rendering creatures unconscious in water below 50 ° Fahrenheit. This can lead to death from hypothermia or drowning.

Once the temperatures started to drop, Sea Turtle Inc asked for help to rescue the sea turtles. People from all over South Texas began showing up and offered to do whatever they could to save the defenseless creatures. Last Monday, the non-profit organization reached its capacity due to the influx of turtles, sending an overflow to the island’s convention center. By the next day, more than 1,700 turtles had been rescued.

Volunteers lined them up on tarps and filled children’s pools with water to heat them. In the Gulf, Texas rangers used their patrol boats to rescue hundreds of turtles. Due to the freezing temperatures, the sea turtles lost the function of their fins. Volunteers used nets to collect them, and by the end of the day, the convention center was home to 3,500 turtles.

People went out on pleasure boats, fishing boats, and even dinner cruises to rescue the turtles. The tide pushed many turtles ashore, so the volunteers also walked the beach to pick up the stranded creatures. They transported the turtles to the nearby facility using trucks and trailers. Without the support of the community, the enormous rescue effort could not have been carried out.

Texas Rangers assigned to Cameron County rescued 141 sea ​​turtles from the Brownsville Ship Channel and nearby bays. According to an update from Wendy Knight, CEO of the nonprofit organization, one of the turtles weighed 400 pounds! Six people had to help move the giant tortoise under heating lamps. They estimated that he was over 150 years old.

Wendy was very touched by the great generosity of the local community.

“The love and support of people who just want to help with things that cannot be avoided on their own is overwhelming,” Knight told NPR.

The massive blackouts on the island presented another challenge. Volunteers struggled to keep the turtles warm as temperatures continued to drop. The power went out at 2 a.m. on Valentine’s Day and the turtle tanks began to cool. They temporarily moved the turtles to tarps and paddling pools, but were concerned about caring for them without power.

Just when they thought it couldn’t get any worse SpaceX employees Came to save the day Representatives from the nearby Boca Chica launch facilities visited Tuesday night. They brought a huge commercial generator to the nonprofit to help them heat their tanks and equipment.

Knight said on Facebook: “This kind of contact with our community sponsors at SpaceX. There are no words to explain the gratitude we have. They came to us in our darkest hour of need and got us a generator that was complex to find and even more complex to connect to our system. “

Wendy said Sea Turtle, Inc. has collaborated with SpaceX for years on turtle research and conservation training. On Monday, company officials reached out and asked how they could help. Without the huge generator, the turtles might not have survived much longer.

Thanks to the support of the community, thousands of turtles were able to return home.

Fortunately, the organization could release more than 2,200 rehabilitated turtles back to the Gulf of Mexico on Sunday. They worked tirelessly for more than 24 hours to prepare the sea turtles for release. They still have a lot of work ahead of them with the remaining turtles, but so far they have been delighted with the recovery efforts. The team hopes to release many more in the coming weeks.

Turtles have endured the largest cold stun event ever recorded. Wendy called it “the Armageddon of all cold stuns,” and said the blackout greatly exacerbated the event. He also said they prepare each year for cold stuns, but not for long-term power outages simultaneously.

With the help of SpaceX and the massive generator, power returned Wednesday morning. However, Knight quickly discovered that the winter storm had caused damage to all of his heaters and refrigerators. These ensure a pleasant climate for the turtles in the large community tanks. Sea Turtle Inc started a fundraiser to make the necessary repairs, raising more than 25% of its goal so far.

The sudden cold snap sent shock waves across Texas, impacting both humans and animals. At Sea Turtle, Inc, turtle health and safety continued to be their priority. All five species of sea turtles in Texas are threatened or endangered, which only added to the urgency of the situation. Volunteers who didn’t even have running water or electricity in their homes came forward to help.

It took the collaboration of engineers, volunteers and coordinators to carry out the massive rescue. Wendy Knight says she will continue to update Facebook on the recovery of the remaining turtles.

The recent winter storm that hit Texas left millions of people without water and power. It also made it dangerous for animals, who had little shelter from the harsh conditions. Sea turtles in South Texas were stunned by the cold due to the sudden drop in water temperature. The nonprofit Sea Turtle Inc, located on South Padre Island, enlisted the help of volunteers to save the turtles.

The enormous collaborative effort paid off, saving thousands of sea turtles hypothermia. On Sunday, after the gulf began to warm, nearly half of the rescued turtles returned home.

5 Behaviors That Reveal Someone Has An Addictive Personality