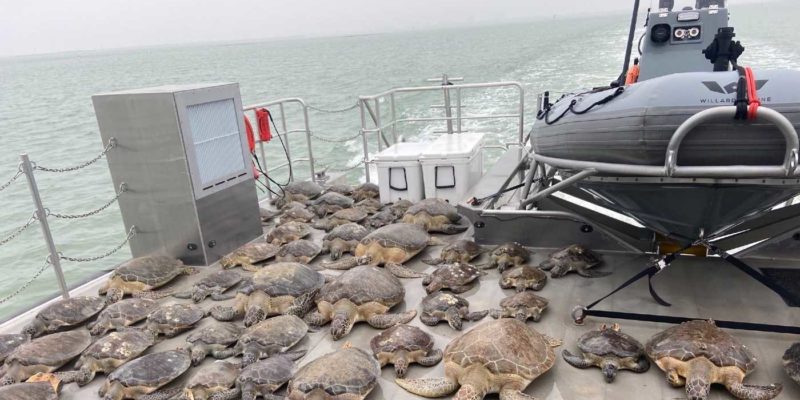 
In the midst of an incredibly severe cold snap, warm-blooded animals are making heroic efforts in Texas to save thousands of their cold-blooded neighbors who lack the ability to defend themselves from freezing temperatures.

Volunteers in Sea Turtle Inc. rehabilitation center and among the local community on South Padre Island in the Gulf have so far rescued more than 4,900 sea turtles from death by “cold stunning”, an event that causes the turtles to fall into a coma if the water falls through below 50 ° Fahrenheit.

My mom is retired and spends her winters volunteering at a sea turtle rescue center in South Texas. The cold snap stuns the local turtles and they are doing many rescues. Today he sent me this photo of the back of his Subaru. They are turtles * literally * all the way down. pic.twitter.com/xaDRNjLDoQ

The normally temperate lagoon at the southern tip of Texas is a year-round place for sea turtles, a rarity for migratory species, but the area lost power earlier in the week.

Volunteer efforts had ended on Tuesday already managed collect 1,700 turtles, lining them up in rows on tarps at a nearby convention center that was donated for an emergency space. The community tried to help the turtles come out of their comatose state by heating them in children’s pools. At the end of the day there were 3,500 turtles in the makeshift I’T’CU.

Meanwhile, in the Gulf, Texas rangers used patrol boats to fish hundreds more who had lost the ability to move their fins in cold water. According to an update by Wendy Knight, CEO of Sea Turtle Inc, another 1,000 cold-stunned turtles had been brought in, including one that was 150 years old and weighed 400 pounds.

Texas rangers assigned to Cameron County rescued 141 sea turtles from the icy waters of the Brownsville Ship Channel and surrounding bays. The sea turtles were transported via the PV Murchison, operated by Sgt. Game Warden Duke and B / M Bowers-Vest. pic.twitter.com/LqFBrElTog

“The love and support of people who just want to help with things they can’t help themselves is overwhelming,” Knight said. NPR.

“It’s a huge, huge community effort,” said Gina McLellan, 71-year-old retired teacher and volunteer. The Washington Post. “Very often we don’t even think about [cold’s] impact on animals, because we are very concerned about our own electricity and water. With this type of event, it is a classic display of humanity towards animals. “

SpaceX to the rescue

SpaceX’s launch facility in Boca Chica arrived Tuesday night and delivered a massive commercial generator to Sea Turtle Inc, which they used to heat their massive tanks and equipment at their hospital.

“This kind of contact from our community sponsors at SpaceX, there are no words to explain the gratitude we have,” Knight said in a Facebook video update. “They came to us in our darkest hour of need and got us a generator that was complex to find and even more complex to connect to our system.”

SpaceX employees actually rescued nearly a thousand other turtles on their own.

PLUS: New technology to save endangered sea turtles uses GPS decoy eggs to catch poachers, and it works

After power returned, Knight discovered that the storm had damaged or ruined all 10 heaters and coolers used for the large community tanks, so Sea Turtle Inc. started a fundraiser so they can make repairs or pay for replacements. They have currently raised 25% of their target goal.

We have overcome more than 4,900 cold-stunned sea turtles in the largest cold-stun event on record. These endangered sea turtles are our number 1 priority, their support and encouragement has been overwhelming. Donate here to support our efforts: https://t.co/9ajzm5oTTv pic.twitter.com/dEqu4Q8xtS

Yesterday, Knight gave another video update in which he described Thursday as “a calm and quiet day” at the makeshift hospital for cold-stunned turtles.

RELATED: Rare turtles known for their permanent smiles are saved from extinction in Myanmar

He noted that they had experienced the largest cold-stun event in recorded history, and it would have been “Armageddon” if it weren’t for the huge influx of time, money and other resources from volunteers. Greetings to all who got involved in this Herculean effort to help sea turtles.

Get Paid $3,200 to Create Art on This Remote Michigan Island for 3 Weeks