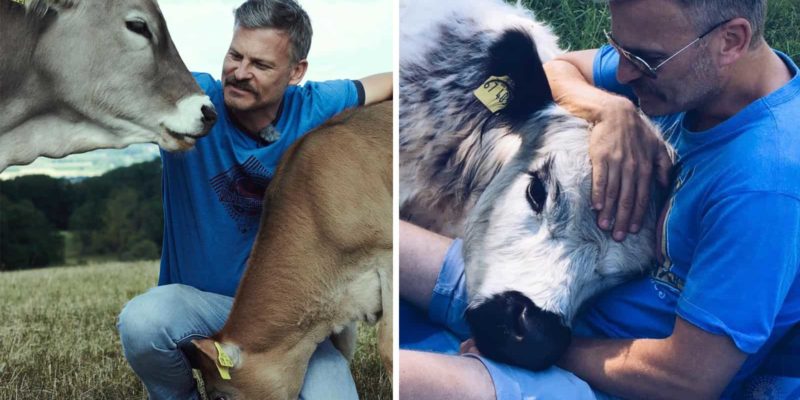 
Joar Berge, also known as the “mustache farmer”, decided to leave his fast-paced city life to reconnect with nature. He grew up in a small town in Germany, where he spent most of his childhood on farms surrounded by animals. As much as he loved the simple life, he moved to the city as soon as he was old enough. However, the connection with nature and his dream of being a farmer never left him.

On his own farm as a child, he kept goats, geese, chickens, ducks, and ostriches. However, he formed the closest bond with a cow named Rexi on a nearby farm. He considered Rexi his “foster child” since he spent so much time with her. They maintained a close relationship, but unfortunately, the calf was taken away within a few years and he had no way of rescuing her.

His love for cows began with this bond he had formed with Rexi. Thanks to her, he had big dreams of become a farmer and have their own cows one day. He had moved across Europe, living in Mannheim, Berlin and Cologne in Germany, as well as on the French Riviera in France. However, one day he finally got tired of the fast-paced urban lifestyle and wanted to fulfill his dream of being a farmer.

At this point, he decided to go back to his roots and return to the small town of Germany. Of course, he knew there was a long road ahead, but he would do whatever it took to achieve his goals. He says patience never came naturally to him, but agriculture taught him this important virtue. As he was starting out, he decided to rescue two cattle to get things moving.

The Mustache Farmer is finally reunited with his favorite animal

“I went back to the area where I grew up, talked to my parents and got the cows, Emma and Dagi, at first, and this really changed my life completely.” Joar says. “It changed direction, I would say.”

She called them Emma and Dagi, and says “this step was the best thing that could happen to me.” Emma is a Tyrolean gray from an organic farm. Dagi is a white Galloway, which is native to Scotland. Dagi is the short name for Dagros, which is the name of almost all cows in Norway (and Joar is Norwegian).

Since he bought the farm, he has enjoyed every day being in communion with nature and its animals. He has many moments of happiness since he left the city live and embraced the true calling of his heart. After leaving work, he hopes to put on his farm clothes and take care of the cows. He likes the smell of the barn, seeing hundreds of birds fly overhead, and discovering new plants or animals.

His two cows have very different personalities, but he loves them both equally. On his website, he says that “they are such beautiful animals that they deserve to be seen from eye level.” By becoming a farmer, he has learned a lot about himself in a short time, both professionally and personally.

Not only does owning a farm reconnect you with nature, but hugging the farm animals does wonders for the nervous system! Joar highly recommends it for anyone suffering from stress or anxiety. Joar says that he is often asked if life on the farm is as beautiful as he imagined it to be. He says, “No, it isn’t. It is more beautiful. “

On his website, he goes on to say that nature, animals, and experiences continue to impress him. Learn to be patient, mindful, and see things from new perspectives every day. At times, he is totally in awe of what life in nature has given him, mentally and spiritually.

He calls himself a cow whisperer as he finds it very easy to communicate and connect with the beautiful animals. Enjoy the farming community so much both online and in real life. He has befriended cow farmers around the world and continues to draw inspiration from their lifestyle. Joar is grateful for the opportunities, inspiration, and connection he has received from social media.

“Now, in the meantime, I have founded a farm animal sanctuary together with friends on a beautiful farm in the area of ​​my old home. There we now have 7 cows, 1 pony, 2 pigs, 1 dog, 4 rabbits, 10 chickens and 2 baby deer. “

He founded the animal sanctuary in a beautiful area of ​​Germany called ‘Odenwald’ in May 2020. There, he and his friends offer the animals a place to live without asking for anything in return. They lovingly care for animals according to their specific needs and with the resources available to them.

Joar says that he loves sharing his life with people on social media because of the beauty and peace he has found in them. He went on to say that he wishes everyone had a cow at home because this would make the world a better place. We would have to agree to that!

Of course, starting a farm comes with many challenges, but the rewards far outweigh the setbacks. Not only can you grow or produce your own food, but you can also connect with animals and nature. In our modern world, many of us would benefit from adopting a more natural lifestyle.

Final thoughts: being a farmer is hard work, but it can completely change your life

Joar grew up on a farm surrounded by many beautiful animals, but lost this connection when he moved to the city. However, he always knew that he would eventually return and become a cow farmer. Fortunately, he was able to achieve his dream and now possesses a sanctuary for many kinds of farm animals. People like Joar give us hope and remind us that we can all contribute in some way to a more peaceful world.

10 Reasons Why Some Friends Refuse To Accept Support