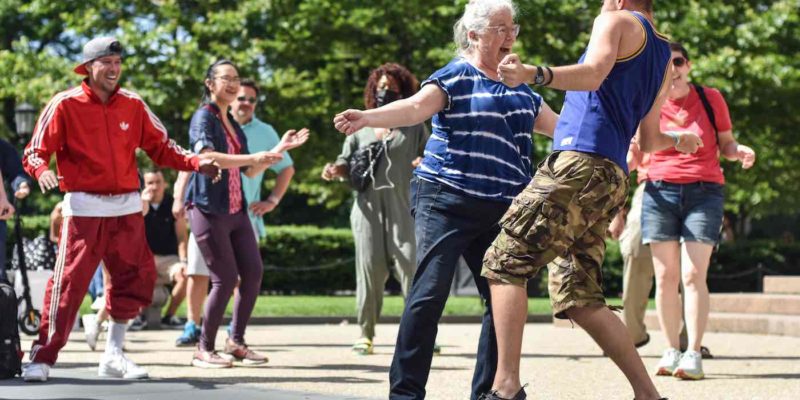 
What do you get when you surprise random people with an unexpected dance party on the streets of New York?

The inspiring group of street performances Improvise everywhere posted a sidewalk decal in a park that read, “stand here for the dance party.”

Designed in the style of ubiquitous social distancing circles, most passersby ignored it or snapped photos once they read its engaging message.

But every time someone followed the directions and stepped directly onto the decal at Grand Army Plaza in Manhattan, they were instantly surrounded by a 100-person dance party with a vintage ’80s boombox.

The group that specializes in large-scale surprise moments in public were eager to get back to their hilarious antics, so they kicked off their first post-pandemic project by teaming up with a completely baffled professional b-boy dance team, the Dynamic Rockers. and the Museum of the City of New York, which opened a new musical-themed exhibition:New York, New Music: 1980-1986.

100 undercover dancers recruited by Improvise everywhere They were mingling in the area, walking the sidewalks or sitting on benches, waiting for someone to stand on the decal, triggering a massive dance party.

Music immediately started blasting from Kid Glyde’s boombox as he walked from the corner and up to the unsuspecting person to get the party started.

The people on the sticker were shocked, but quickly joined in the fun.

SHARE the perfect dance prank with your friends on social media …