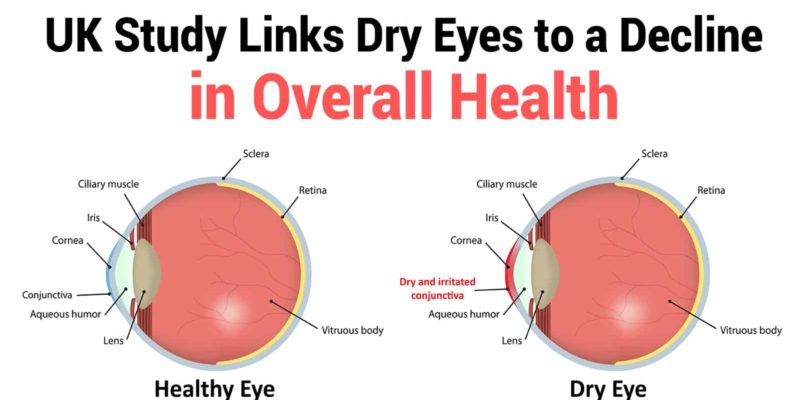 A new study from the UK found that dry eye disease can lead to other general health problems.

According to the National Eye Institute, nearly 16 million Americans suffer from dry eyes. The London Optometrists Association reports that approximately one in four people in the UK has the condition.

The University of Southampton study revealed that chronic dry eye patients tend to have a lower quality of life. The findings showed that people with dry eye disease reported a decrease in visual function and work productivity. They also had a harder time completing daily activities and responsibilities.

Millions of people suffer from this condition and it is one of the main complaints about eye doctor appointments. People of all ages can get dry eye disease, but it occurs most often in women and the elderly. Researchers estimate that about a third of adults over the age of 65 have the disease. However, the actual number is likely higher because there is no official diagnostic test. Also, people with mild symptoms often do not seek medical attention.

What is dry eye disease?

Dry eye occurs when your eyes do not produce enough tears or produce poor quality tears. These tears dry quickly, causing the front of the eye to dry out and irritate. Sometimes the eyes produce extremely watery tears to compensate, but these dry quickly and result in a gritty sensation. Weather dry eyes it can be uncomfortable, there are many treatment options available.

Causes of dry eye, according to American Academy of Ophthalmology:

The NHS reports that in 2014, doctors wrote 6.4 million prescriptions for dry eye disease. This cost over £ 27 million. Since many people suffer from this condition, the research team wanted to investigate how it affects their lives.

The researchers specifically studied adults in the UK, using an online survey of 1,000 patients with the disease. They also surveyed 1,000 adults who did not have dry eye syndrome.

Researchers find that dry eye is associated with other conditions

The study, published in the BMJ Open magazine, revealed that participants with dry eye disease had more mobility problems. They also had more difficulty completing daily tasks than those without dryness. The surveys also showed that patients were more likely to experience anxiety and depression.

People with severe symptoms experienced a decline in social and emotional functioning. They also had lower labor productivity, having to miss work more frequently due to their condition.

Dr Parwez Hossain, Associate Professor of Ophthalmology at the University of Southampton and lead author, said: “This study provided very useful information on the burden that dry eye disease places on patients. In addition to confirming the impact on work and social life, we also found that the extent of the effects is consistent with the severity of the symptoms. “

While the association between dry eye and other diseases is unclear, the study showed a general deterioration in health.

“We also found that participants with symptoms of dry eye disease were much more likely to suffer from other comorbidities; twice as many had arthritis, hearing loss, or irritable bowel disease compared with the symptom-free cohort. While we cannot establish causal associations through this study, the presence of dry eye disease appears to affect an individual’s health and vision-related quality of life, ”Hossain said.

Both groups reported similar levels of reading and screen time. However, the dry eye group reported higher exposure to environmental irritants such as air conditioning, heating, and air pollution. Researchers believe these factors could exacerbate dry eye disease or patients have more awareness.

Final thoughts: dry eyes related to other comorbidities and deterioration in general health

Your eyes say more about your health than you thought, as this study shows. The researchers found that people with dry eye disease reported more difficulties with daily tasks and lower visual function. They also seemed to have higher cases of anxiety and depression and had to miss work more often. Twice as many dry eye patients had arthritis, hearing loss or irritable bowel syndrome compared to the other group.

Researchers say the association between dry eye and other diseases is unclear without further study. However, it appears to affect the quality of life of patients based on self-reported symptoms. Hopefully, future research will yield more answers on how dry eye disease affects overall health.