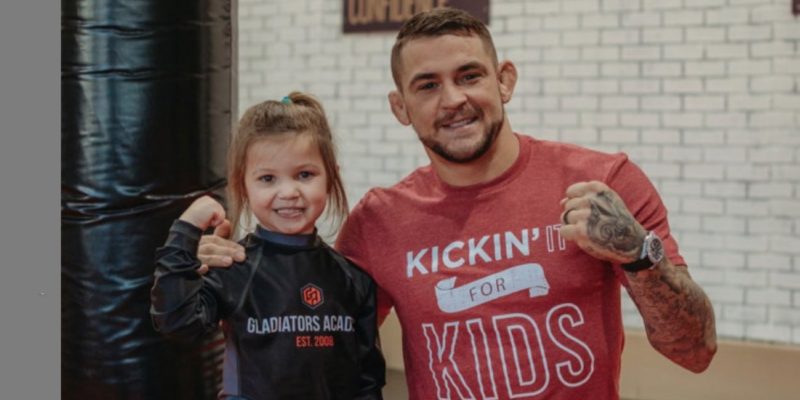 
He just came in at # 1 on the UFC lightweight rankings, after knocking out famous mixed martial artist Conor McGregor over the weekend, but Dustin Poirier is also # 1 in the hearts of kids and their parents in Lafayette. , Louisiana.

When the 32-year-old former interim UFC lightweight champion wanted to give back to his hometown, he and his high school girlfriend-turned-wife Jolie only had to travel to his closet for inspiration.

They began auctioning off the shorts, jackets and coats that Poirier wore in dozens of historic fights, selling the memorabilia through a new nonprofit called “The Good Fight” dedicated to helping underserved communities in his local region of Acadiana.

The foundation has raised thousands of dollars since 2018 to impact others, including the young family of fallen LPD officer Michael Middlebrook and disabled children who did not have a playground.

The first kit auctioned was from the Poirier vs. Eddie Alvarez fight, and the proceeds provided 3,000 meals for its local Second Harvest Food Bank.

In August 2019, a playground for children, but built especially for children with special needs, became the fulfillment of a last wish of a child in a wheelchair, after Jolie heard the history.

Poirier says it makes him “really proud” and really happy, especially as the father of a little 4-year-old daughter.

RELATED: Street Fighter is giving back: 14-0, the inspiring story of Brian Ortega of UFC – Hispanic Athlete of the Year

“I can be the tough guy, travel the world, get into bloody fights.” he said KLFY News. “(But) I can go home and I’m still a dad. I can play barbies. It really balances me out. “

The sale of fighting kits provided more than 100 homeless women with aid kits and 500 children with school supplies and backpacks at Acadian High School. “We were also able to provide the shelter with new furniture for its residents,” he reports. The good fight website.

And even the COVID outbreak hasn’t taken this family out of their donation game. They organized a Thanksgiving food drive and prepared banquets for all the surrounding shelters.

Now other fighters are donating parts of their kits for auction, including the winner of the UFC main event fight on Wednesday, Michael Chiesa of Spokane, Washington.

Until February 15 tickets can be purchased for the raffle for $ 10 for a chance to win the autographed Reebok Walkout Jacket worn by the welterweight fighter during the event, as well as winning a private Zoom Call, with 100% of the proceeds benefiting The Good Fight Foundation.

A large number of donations were received after Dustin’s fight on January 24, but his crowdfunding page has reached only 10% of its $ 100,000 goal. so join the funding if you can.

Paul Acron, a fan who donated $ 105.00 wrote: “Congratulations Dustin … Great fight against Conor, but an even bigger fight to try to make things even for these boys and girls who deserve it.”

“I’m a fighter. That’s what I do. Now I want to fight the good fight, for those who cannot, ”says Poirier. “I have created a platform for fellow athletes and fans to come together, fight for underserved communities and respond to the call of those in need.”

HIT Your Friends: Sharing this celebrity who fights for good …