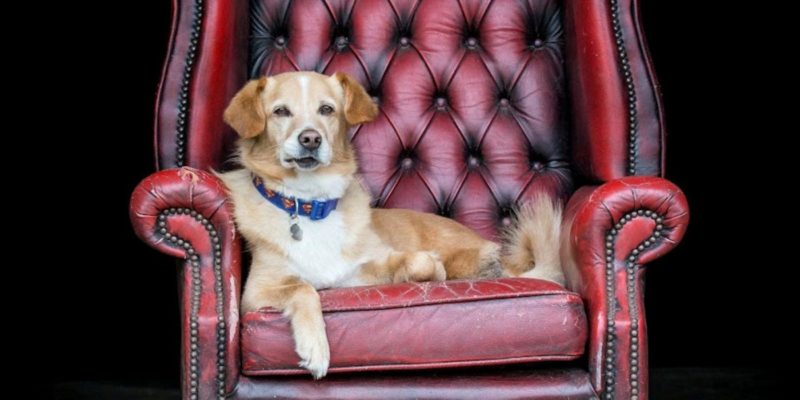 
A two-legged dog that was rescued from the streets of Afghanistan has made a remarkable recovery and loves to run on his two legs.

Maz, the Labrador cross, was struck by a car that crushed both of its hind legs in 2013 and was left wandering the streets of the war-torn nation.

UK NHS doctor Helene Svinos said she saw a video of the ‘friendliest dog’ online on Valentine’s Day in 2015 and couldn’t stop thinking about it.

Despite his serious injuries, Maz was “overjoyed” and Helene decided she had to bring him back to her home in Manchester, England.

After contacting her old friend Louise Hastie, a former soldier who rescues dogs from war zones, the dog was taken to Kabul and was finally transferred to the UK in May of that year.

Maz has joined a gang of other puppies at Helene’s home as she has six rescue dogs, including a paraplegic Pomeranian Bambi and a blind Husky Inka, both from Romania.

Despite having both of his hind legs amputated after merging, Maz has remained optimistic and is always eager to go for a run.

Helene said the dog has repeatedly refused to use wheels or walking aids as it loves to ‘run around as fast as light’.

Wonderful Maz has even beaten Helene’s three springer spaniels in one sprint, even though they compete in CaniCross races.

Helene said: “Maz is just a complete and absolute star. You cannot feel sad or unhappy around him as he is full of joy except when it is raining.

“Maz has never let anything stop her from doing all the things she wants to do, including rolling in the mud!

“You just live in the moment and don’t focus on what happened in the past.”

Helene, who works on the front lines as an ER doctor at Manchester Royal Infirmary, said that coming home to her dogs helped her during the Covid crisis.

She said: “I am an ER doctor who works during the lockdown, but coming home he just puts things in perspective.

“Sometimes it has been difficult during the confinement, to feel alone, but then I return to these happy dogs.”

The smart dog somehow found his way to a vet where he befriended one of the doctors and would always jump up to greet anyone despite his injuries, Helene said.

They tried to keep the friendly dog ​​healthy, but with limited resources, they couldn’t do much more and posted an appeal online.

RELATED: Never give up! Terrier lost 290 days after the holidays is found thanks to social networks

Louise Hastie from Legs of war, a charity he created to help dogs in areas of civil conflict, helped bring Maz to Manchester, where he is now “full of life.”

He had two four-hour surgeries to remove his hind legs in May 2015 before he finally found his forever home with Helene.

Helene said: “He is the most wonderful dog and I am so grateful to have him in my life.

CHECK: Stranger Takes Home 2 Dogs After Helping Car Accident Victims Get Airlifted To Hospital Who Can’t Care For Their Puppies

“There are so many amazing dogs in the world that need a home and they will bring you as much joy as you give them.

“I have a special love for disabled dogs and I think people are concerned that they might have problems, but that is not true.

“They are often overlooked, but they can live a full and happy life.”

PAW the Good News to Pals on Social Media …