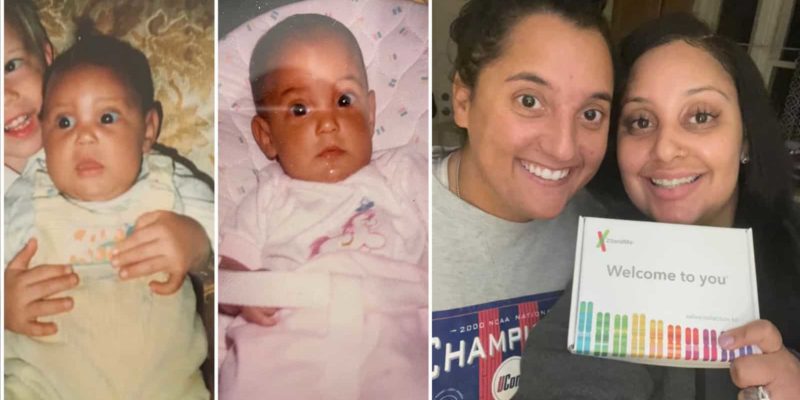 When two co-workers found out that they were actually long-lost sisters, it sounded like something out of a movie. They had an instant connection when they met and quickly became best friends. However, they would not find out that they were sisters until eight long years later.

Julia Tinetti and Cassandra Madison met in 2013 while working at the Russian Lady Bar in New Haven, Connecticut. Both had tattoos of the flag of the Dominican Republic and both were born and adopted in that country. After piecing together their similarities, coworkers started hanging out all the time outside of work. They went out for drinks and dinner and even started dressing the same!

The two of them just got along, and the connection seemed very natural. Her co-workers even joked that they looked like sisters.

But when Tinetti and Madison compared the adoption papers, they were disappointed to find that they didn’t match. Tinetti said they were from two different cities according to the newspapers and had different last names. Their mothers’ names on the paperwork weren’t the same either.

Although the newspapers said they weren’t related, they both felt an overwhelming connection between them. Not only did they look similar, but their birth dates and backgrounds were strikingly similar. Tinetti was born in the Dominican Republic in 1989 and was adopted shortly after. Madison was also adopted shortly after she was born in 1988 in the Dominican Republic.

Madison told Good Morning America that she felt strongly that she and Tinetti were long lost sisters. However, the discrepancies in the adoption papers made her hesitate.

When Madison moved to Virginia Beach in 2015, the two stuck together, often talking on social media. Madison couldn’t help feeling that she and Tinetti were related and wanted to delve into their ancestry. She got her wanting in 2018 when her adoptive mother bought her a 23andMe DNA genetic testing kit for Christmas. Through the results, he was able to find several distant relatives.

How a friend connects the dots, confirming that they are lost sisters

Molly Sapadin, Tinetti’s childhood friend, helped solve the mystery about the two co-workers’ relationship. Sapadin had also been adopted from the Dominican Republic in 1990, shortly after she was born. Sapadin and Tinetti’s adoptive moms had been friends while the two girls were growing up in New Haven.

Because of this connection, Sapadin and Madison compared their adoption documents. Sapadin thought that perhaps they could be half-sisters since their last names matched. According to the paperwork, they also had the same biological mother. The three women believe that since Sapadin and Tinetti were adopted on the same day, their roles must have been switched.

Sapadin said that a DNA test revealed that Madison is actually his third cousin, not his half-sister. However, she was still excited to learn more about her biological family. According to Good morning america, Tinetti and Sapadin have the same mother in their adoption papers. However, they want to do more DNA tests to confirm if the woman is actually her biological mother.

Putting all the pieces of the puzzle together

Madison ended up connecting with a first cousin who helped her find her biological father, Adriano Luna Collado. He still lives in the Dominican Republic, but unfortunately, his mother Yulianna Collado died in 2015 of a heart attack.

However, through genetic testing, Madison discovered that she had many other relatives in the Dominican Republic. In 2018, she flew to her home country to meet her seven siblings and her biological father. While there, he asked his father if he had ever given another baby up for adoption.

He said yes, just because one of Madison’s brothers had a serious illness at the time. They couldn’t take care of the other boy and take care of their brother, so they had to make a difficult decision. During this conversation, Madison simply learned that it was Tinetti whom she had put up for adoption. On January 28, a DNA test Tinetti took finally confirmed his hunch: actually long lost sisters!

Good news, but with an awkward moment

They were delighted with the news, but it has been a lot to process for the whole family.

“Still processing the magnitude of the situation,” he told Good Morning America. “This is the kind of thing you see on television. Finding my biological family just wasn’t something for me. I grew up with a big family, so I just left it as it was. “

However, after the pandemic eases a bit, he hopes to fly to meet his family in person. For now, they have been chatting by video to get to know each other.

Thank goodness for modern DNA testing, which put the pieces of a very complicated puzzle together. DNA tests showed that the adoption agency had accidentally switched the roles of Sapadin and Tinetti. Because of this, it took Madison and Tinetti eight years to make sense of their deep connection. They are not just best friends, they are sisters long lost, now reunited forever.

DNA testing also revealed that Sapadin has a twin that he hopes to connect with.

“Be prepared. They may not want to meet you and may have closed that chapter in their life,” Madison said also on Good Morning America. “For me, it’s always been, ‘I’m going to find these people if it’s the last thing I do. ‘I was going to die trying. “

This story is nothing short of a divine miracle. Tinetti and Madison never would have imagined that their friendship would lead them to discover that they are sisters. Through DNA testing, they even found out that Tinetti’s childhood friend is his cousin! Hopefully the whole family can have a great and happy reunion soon and make up for lost time.

Do you know someone who discovered that they were actually long lost sisters? Share your stories in the comments!

15 Behaviors That Reveal a Pessimistic Person

How to Make Homemade Immunity Gummies To Help Fight Illnesses