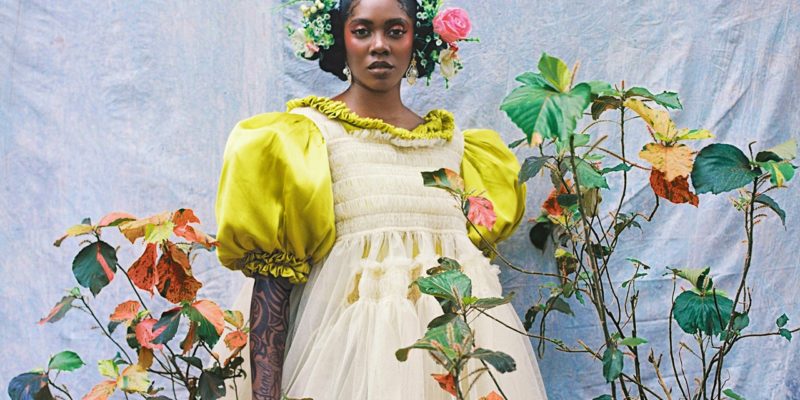 Afrobeats is sweeping the U.S., but so far the wave has been dominated by men. Yet one woman stands out in the genre: Tiwa Savage. She blends a mix of English and Yoruba, her native tongue, to stick up a major middle finger to the patriarchy. And she does it all without a trace of foundation on her face.

Tiwa Savage’s electricity went out three times during our video call. “Sorry about the power breakup,” she apologizes each time. I totally understand as we’re both connecting from West Africa: Savage in Lagos, Nigeria, where she’s been since the pandemic began; me in Accra, Ghana, where I’ve been for the past two months to be with family. Electricity going out is a regular occurrence in major African cities such as ours. Despite the steady interruptions, Savage’s energy never flags.

Our meeting is serendipitous as Savage’s music has actually been a sounding guide, a hymnal of sorts, that subconsciously encouraged me to move across the Atlantic, from New York to the motherland. Last year, I deeply connected to her music because of my desire to get back to my roots. I wanted to learn about where my mother came from and see my grandmothers’ childhood homes because that plays a role in who I am becoming.

On this particular afternoon, Savage’s honey-highlighted hair is blown out straight. Her skin, tinted with bronzer, is glowing and she wears a comfy-looking Burberry knit sweater. The international Afrobeats star has traveled the world through her music, performing across continents for a decade, but for the past year, the “Dangerous Love” singer has been in her hometown of Lagos with her son, Jamil. She seems at peace taking care of her five-year-old, being close to family, and making music away from the chaos of the world. ”Being at home with my son, not having to wear makeup, and I don’t have to suck my belly in all the time and wear heels,” she says. “It was amazing.”

“There’s so much pressure now. There needs to be some people that are not too perfect. I don’t want to be looking jacked up, but I also want to look relatable.

Tiwatope Savage was born in Lagos State, Nigeria. When she was 11 years old her family moved to London where she showed an early interest in singing and performing (at 16, she sang backup for George Michael). But for her parents, formal education was always a priority. So Savage eventually earned an accounting degree from the University of Kent.

After satisfying her parents, she intended to pursue a singing career, but again they insisted she approach it from an academic route. “They were like, ‘If you’re serious about it, you have to study,’” Savage recalled in the interview with Hot 97. “So I applied, got a full scholarship, went to [the prestigious Boston music college] Berklee, and studied jazz.”

Along the way she famously got the opportunity to sing backup for legends such as Whitney Houston, Mary J. Blige, and Chaka Khan, to name a few. By the time Savage started her solo career in the early 2010s she was a seasoned vocalist and Grammy-nominated songwriter.

Her signature sound is delicate and feminine, organically interweaving English and Yoruba into deeply thoughtful rhythmic songs about love, money, politics, and the patriarchy. Tracks like “Koroba,” which interrogates the power play between rich men and young women (I no come this life to suffer / If I follow politician / You go hear am for paper / Them go call am prostitution / Who no like enjoyment?), or “49-99,” about the working class and corruption, have launched Savage into a stratosphere of artistry not often seen by her contemporaries. Producers like Blaq Jerzee, Pheelz, and London have created a sonic fusion in Savage’s music that blends classic Afrobeats instrumentals (saxophone, horn, drums) with modern synthesizer cords.

Every aspect of how she presents herself is intentional — from the natural hairstyles she wears in the majority of her music videos to how her melanin-rich skin is lit on camera. As a self-described “chocolate girl,” colorism and the insidious European beauty standard embedded into colonized nations are something she’s very cognizant of.

“I actually did try to bleach my skin when I was about, I think, 14, 15,” she recalls. “Even now, on my back I have patches… My mom, she was cleaning my room and saw the cream that I used to mix with lemons. She wasn’t even angry. It was more her disappointment. So I stopped, but I was always insecure about being dark.”

When Savage began gaining more attention, her perspective changed. “When I started my career I wasn’t embracing who I was fully yet because I was just trying to crack into the market,” she says. “My first two singles were very American and it wasn’t very African. But then, as time went on, I just started seeing how powerful my platform was and how mothers would say, ‘My little girl really looks up to you.’” So, she made an about-face.

On set, Savage makes sure she looks “as natural as I am in real life,” even going so far as to insist that blemishes are not edited out of her photos. She doesn’t feel pressure to appear to be something she is not. Actually, being inauthentic would probably be harder for someone as self-assured as she is. “I have a platform and I’m digging more into my responsibility for younger people,” she says. “And I feel like there’s so much pressure now and it’s going to get even worse with social media and there needs to be a balance. There needs to be some people that are not too perfect. I know we want to look good. I don’t want to be out there looking jacked up, but I also want to look relatable.”

During our call, Savage proudly tells me that she hasn’t put on foundation in two years. At home, running errands, even for photo shoots — yes, including this Allure cover shoot — not a drop has been applied. Did this have to do with her aesthetic transparency? Well, yes, in a way: “I met Naomi about three years ago and she told me one of the things that she gave up was wearing foundation and I was like, ‘How?’ Then I just decided I’m never going to use foundation.” Truth be told: Whatever beauty advice Naomi thee Campbell casually doles out, anyone should take. But for Savage the appeal was the process, or a lack thereof. Foundation is one less thing, one unessential step she can remove from her crammed schedule and still get her desired result. Makeup, much like her life right now, is about simplicity. “Just powder, blush, liner, and lips,” she says.

Savage is honest, empathetic, and, at times, as giddy as a schoolgirl (she goes on and on about her crush on Korean movie star Lee Min-ho. “That’s your stepdad,” she told her son while watching The Legend of the Blue Sea). She spends her days reading her Bible, watching Korean movies on Netflix, meditating, and staying off social media (someone else runs her accounts for her). She’s also been thinking about ways to infuse serious topics into her music. In her next chapter, Savage wants to take fans on a journey that doesn’t involve a collection of “love songs and sweet, cute records.”

After a year riddled with police brutality, #EndSARS uprisings, and a massacre at the Lekki tollgate, not far from her home, Savage has refocused. She spent this past year watching the news and speaking out about issues in Nigeria, like the sexual abuse of young girls, with hope that after hashtags die the momentum to protect society’s most vulnerable will not. Her foundation, We Are Tired, was created to provide legal support and representation to sexual assault survivors in Nigeria. Savage’s work addressing corruption has sometimes been followed by backlash from politicians and religious leaders. Her stance: “I’m not trying to have the hottest song or club-banging hit or millions of streams,” she says. “I feel like the world is going through stuff and I need to play my part.”

The Afrobeats star gives us a short but powerful — have you ever tried African black soap? — list of local beauty favorites.

“They really look after natural hair,” Savage says. “Even if you wear wigs or weaves all the time, she conditions really well so that your natural hair is growing underneath.”

Savage isn’t a frequent spa-goer, but she does love getting the occasional hammam treatment (a Middle Eastern-based practice that generally includes a skin- and mood-transforming combination of a steam bath, full-body exfoliation, and light massage). This is her favorite spot to get a hammam in Lagos and she adds, “When I’m in London, I go to Harrods.”

Made from shea butter and oils, this soap from Nigerian-born and Ghana-based skin-care brand R&R Luxury is a key step in Savage’s daily skin-care ritual: “I wash my face [with it], and every other day I have different masks that I do in the mornings. I mix turmeric and honey and put it on my face for 15 minutes. I also have an LED mask that I use every other night.”