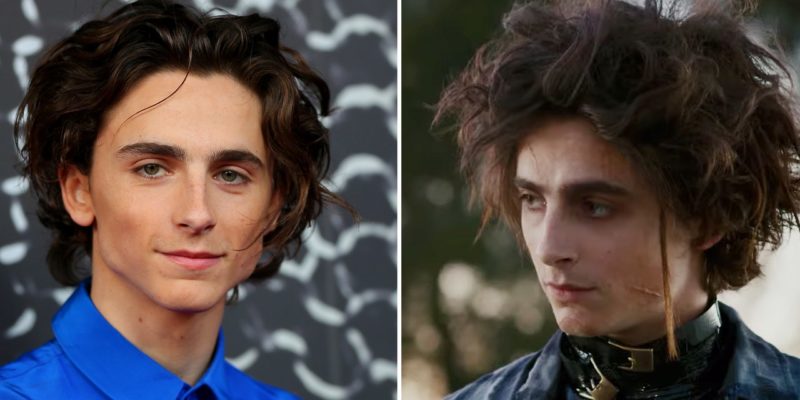 As usual, there was a lot going on during the Super Bowl on February 7. Overzealous referees. A streaker in a neon-pink thong monokini. A sea of fully bandaged The Weeknd clones. But the thing that caught my attention more than anything was… Timothée Chalamet? He’s definitely not the first person anyone would expect to pop up during the year’s biggest football game (or any football game, let’s be honest), but he did — in a full Edward Scissorhands costume, complete with wild, dark hair and pale-as-hell makeup.

Chalamet wasn’t actually at the Super Bowl. Rather, he appeared in a commercial for Cadillac, themed around the Tim Burton classic and costarring none other than Winona Ryder herself. Don’t get me wrong, there are few things I hate more than when companies use my own nostalgia to sell me stuff (and I love Edward Scissorhands, so this commercial stung particularly deep). I’m also not a member of Chalamet’s army of adoring fans, however, I won’t lie. Timothée Scissorhands is serving looks.

This take on the hair and makeup aren’t nearly as extreme as that of the film, with towering, lopsided black hair and a heavily scarred complexion. This commercial simply uses what Chalamet is already working with: a shag of brown, chin-length hair, pale skin, prominent undereye circles, and the general look of malaise.

Cadillac is merely answering the question of what Edward Scissorhands would look like if he went to art school, chain-smoked, and was super into Joy Division. And you know what? I wouldn’t be mad if he just looked like that all the time. Timothée, if you’re reading this (he isn’t but go along with me here), I fully expect this messy hair and eyeliner to make an appearance at your next film premiere. They’re definitely better than the mustache. Thank you.

More on celebrity hair and makeup:

Makeup Brushes Pro Artists Use the Most — Reviews