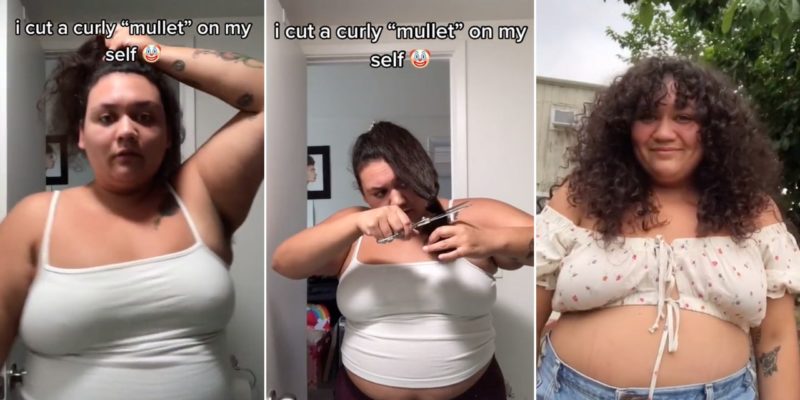 It’s not every day that I get to say this, but I recently saw a TikTok that made my jaw drop. A young woman, alone in her bathroom, swept her long, wavy hair into a high ponytail. In one hand, she grasped the end of the pony and held it straight upward — a pair of kitchen scissors sat in the other. You can imagine what happened next: Snip. Snip. Snip. She cut a horizontal straight line all the way across, right through the middle. Shockingly to me, she let the ponytail down to reveal a brand-new (and quite cute) shag haircut, complete with choppy, all-over layers.

A few flips of my thumb later and I saw another person in their bathroom, ponytail in one hand and scissors in the other. And then I saw a third one. And another… and another. Apparently, I had stumbled onto the world’s next beauty phenomenon: the ponytail shag. Though these unconventional hair-cutting videos show results ranging from OK to flat-out amazing (see the clip below), no one will be surprised to learn that hairstylists aren’t the biggest fans.

“I wouldn’t suggest this to anyone at home,” says Takisha Sturdivant-Drew, a New York City hairstylist. “I don’t see a ‘shag cut’ from these videos at all; I see [people] cutting the ends trying to create some kind of shape or just get clean ends in some sort of a style.” Fellow New York City hairstylist Erickson Arrunategui adds that, although many people are quite happy with the results of their own DIY cuts, the ponytail chop isn’t exactly universally sound. “This method may work for someone with wavy or curly fine hair, where the mistakes won’t show as much, but a lot can go wrong with this ‘technique’ and it’s not so forgiving on all hair types,” he explains.

So, what can go wrong with the ponytail shag? Before we get into that, let’s talk about why gathering and snipping hair like this creates these kinds of layers in the first place. “Cutting your hair when it’s in a ponytail creates shag-like layers because you are over-directing all the hair and gathering it to one point,” Arrunategui says. “So all the hair at the top of your head will be shorter, and all the hair around the perimeter will be longer.”

Seems pretty simple, right? It is, but as Arrunategui explains further, this method leaves a lot of room for irreversible fuck-ups. “The issue with this technique is, depending on the placement of the ponytail, tension, and direction of the grain, you can end up with a very choppy, uneven result with stair-like layers,” he says. It also doesn’t escape him that the overwhelming majority of folks trying this at-home shag cut are using kitchen or crafting scissors, which can lead to disaster, ponytail or not. “Using house scissors so blunt like that is not good for your hair and can result in split ends.”

Brad Jensen on Beating Addiction and Getting Sober and Fit

Volume vs. Intensity for Hypertrophy: Which Is More Important?