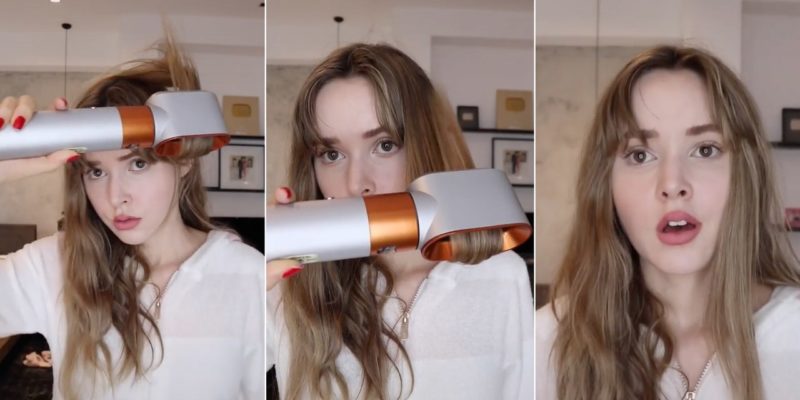 If you’re the proud owner of a Dyson Airwrap, we’re about to hit you with some game-changing information. Your pre-styling dryer attachment — you know, the ovular one with the hole through the middle — can actually straighten your hair all on its own… that is if you use it in a somewhat peculiar way. As people on TikTok recently discovered, you can just loop sections of hair through the middle of that hole, flip it upside down, and slowly drag the dryer from the top down.

Take it from New York City hairstylist Matt Newman; while testing a similar dryer with a similar attachment, he rough-dried his hair as usual in a video, after which a handful of commenters told him he was using it incorrectly. He says he had no idea what that meant until he saw someone else looping their hair through the hole “for a split second” during a late-night TikTok scroll.

So he tried the method for himself in a video, shown above, that went a little viral (and by “a little,” we mean it’s earned 14 million views and counting). In response, some Dyson Airwrap owners put it to the test with flawless results.

Naturally, we had to reach out to Dyson to confirm whether or not the pre-styling attachment was actually designed to be used this way. “While [Dyson] loves seeing people experiment with Airwrap, the attachment was not designed to be used this way,” a representative of the brand says. So if you’ve been using your dryer the traditional way, don’t worry, you’re not doing anything wrong. This hack clearly does the trick if you’re trying to straighten your hair on the fly, though.

The main caveat, by the way, is that it definitely works better on dry hair than wet — as Newman discovered first-hand — but if you give your hair a good rough dry first, you should be in decent shape.

A Dyson Airwrap, as you well know, is definitely a bit of a budget buster (550 big ones, to be exact). This new method, however, proves just how versatile it really is (and that’s with just one of the six attachments). Makes us wonder what other styling tools we should be using differently…

Now, see how long hair has evolved within the past 100 years:

Says You! Why Do Front Squats?