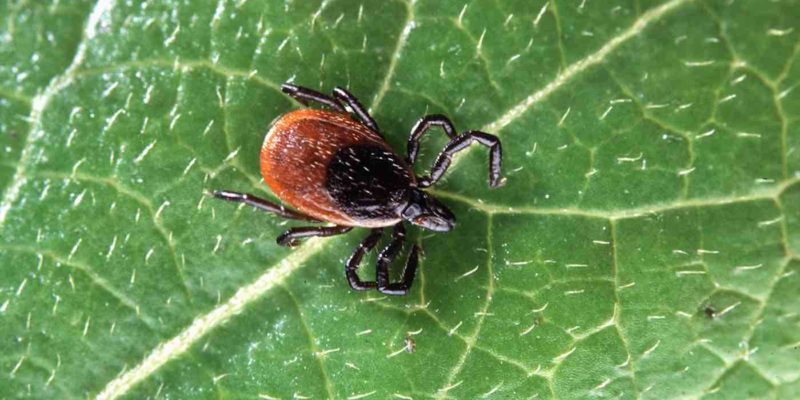 Small molecules called nanobodies, which can be designed to mimic the structures and functions of antibodies, may hold the key to blocking a tick-borne bacterial infection that remains out of the reach of nearly all antibiotics, new research suggests.

The infection is called human monocytic ehrlichiosis (HME) and it is one of the most prevalent and life-threatening tick-borne diseases in the United States. Initially, the illness causes flu-like symptoms common to many illnesses and, in rare cases, can be fatal if left untreated.

Most antibiotics cannot accumulate in concentrations high enough to kill the bacteria that causes the infection, Ehrlichia chaffeensis, because the microbes live and multiply inside human immune cells. Bacterial pathogens commonly known as Streptococcus and E. coli do their infectious damage outside of host cells.

A series of experiments in cell culture and mice showed that a specific nanobody they created in the lab could inhibit infection by blocking three ways the protein allows bacteria to sequester immune cells.

“If multiple mechanisms are blocked, it’s better than stopping one function, and it gives us more confidence that these nanobodies will actually work,” said lead study author Yasuko Rikihisa, a professor of veterinary biosciences at Ohio State.

The study supported the feasibility of nanobody-based ehrlichiosis treatment, but much more research is needed before a treatment is available for humans. There is some urgency to find an alternative to the antibiotic doxycycline, the only available treatment. The broad-spectrum antibiotic is not safe for pregnant women and children, and it can cause serious side effects.

“With only one antibiotic available as a treatment for this infection, if antibiotic resistance develops in these bacteria, there is no treatment left. It’s very scary, ”Rikihisa said.

The research was published this month in procedures of the National Academy of Sciences.

The beginnings of the breakthrough

The bacteria that cause ehrlichiosis are part of a family called obligate intracellular bacteria. Not only does E. chaffeensis require internal access to a cell to live, it also blocks the host cells’ ability to program their own death with a function called apoptosis, which would kill bacteria.

“Infected cells normally commit suicide by apoptosis to kill the bacteria within. But these bacteria block apoptosis and keep the cell alive so they can multiply hundreds of times very quickly and then kill the host cell, ”said Rikihisa.

Rikihisa, a longtime specialist in the Rickettsial family of bacteria to which E. chaffeensis belongs, developed the precise culture conditions that allowed these bacteria to be grown in the laboratory in the 1980s, leading to dozens of discoveries that explain how they work. Among those findings is the identification of proteins that help E. chaffeensis block programmed cell death of immune cells.

The researchers synthesized one of those proteins, called Etf-1, to make a vaccine-like agent that they used to immunize a llama with the help of Jeffrey Lakritz, a professor of preventive veterinary medicine at the state of Ohio. Camels, llamas, and alpacas are known to produce single chain antibodies that include a large antigen-binding site at the tip.

The team cut out segments of that binding site to create a library of nanobodies with the potential to function as antibodies that recognize and bind to the Etf-1 protein and stop E. chaffeensis infection.

“They work in a similar way to our own antibodies, but they are tiny tiny nanoantibodies,” Rikihisa said. “Because they are small, they go into nooks and crannies and recognize antigens much more effectively.

“Large antibodies cannot fit inside a cell. And we don’t need to rely on nanobodies to block extracellular bacteria because they are outside and accessible to the ordinary antibodies that bind to them. “

After examining the candidates for their efficacy, the researchers found a single nanobody that adhered to Etf-1 in cell cultures and inhibited three of its functions. By producing the nanobodies in the liquid inside E. coli cells, Rikihisa said his lab could produce them on an industrial scale if necessary, packing millions of them into a tiny drop.

He collaborated with co-author Dehua Pei, an Ohio State professor of chemistry and biochemistry, to combine the small molecules with a cell-penetrating peptide that allowed the nanobodies to be safely delivered to mouse cells.

With this study providing proof of principle that nanobodies can inhibit E. chaffeensis infection by targeting a single protein, Rikihisa said there are multiple additional targets that could provide even more protection with nanobodies administered alone or in combination. He also said that the concept is widely applicable to other intracellular diseases.

“Cancers and neurodegenerative diseases work in our cells, so if we want to block an abnormal process or an abnormal molecule, this approach can work,” he explained.

We’ll be sure to share more news about this hopeful new approach to blocking disease in our cells.