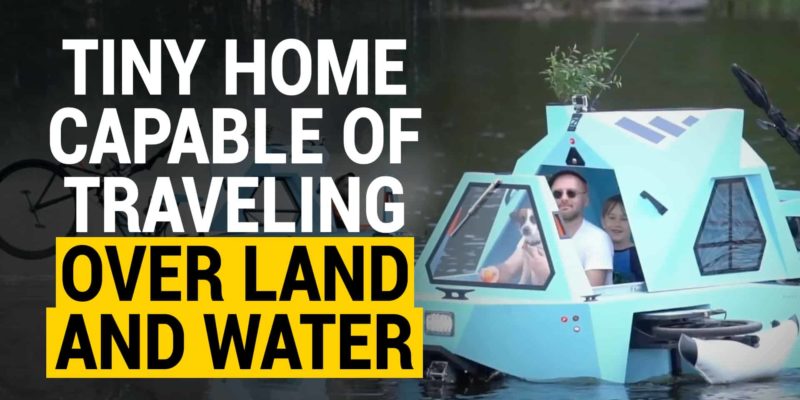 
Living in a small house has many advantages: it is environmentally friendly, cheaper and encourages minimalism. In today’s world, people want to cut costs whenever possible. One of the easiest ways to accomplish this is to eliminate mortgage payments and reduce the size of your home. Get into the tiny house movement.

Living in a small house gives you a unique opportunity to reflect on what is really important. We don’t really need much to survive, just food, water, shelter, clothing, and positive relationships. When you reduce your expenses and “unnecessary necessities”, you start appreciate simplicity much more.

Many people in the tiny house movement also enjoy a closer relationship with nature. Many of these homes are built in forests or secluded locations so that homeowners can reconnect with the natural world. Not to mention, some of them are mobile too, giving people the opportunity to explore different areas.

How Zeltini came up with the idea for this little house

That’s the idea behind Zeltini, which builds little electric houses that can cut through land and water. Aigars, the founder and CEO of Zeltini, shared more with us about his company and how it is changing the face of the tiny home industry.

“When I was in Amsterdam, I stayed in an eight-meter boat and fell in love with the concept of living in a boat,” Aigars said. “But, I like the dirt too, so I thought,“ Okay, that’s it! I am going to build amphibious houses ”.

“So Z-Triton is a houseboat trike; It is a small amphibious electric caravan. It is a tiny boat, a tricycle and a house for two people ”, he explains.

The bicycle can switch to boat mode in about five minutes simply by lifting the tires and inflating small rafts on each side for added stability. The company hopes to ship worldwide eventually, although they will start with Europe first as they are based in Latvia.

Some specifications about the exclusive electric tricycle motorhome:

These unique tiny houses have everything you could want in an RV. While you probably don’t want to live in them full time, they are perfect for a weekend getaway to nature. They have all the comforts of home along with modern technology, making it the best of both worlds. Whether you are driving or boating, you can take your little home with you for adventure!

“The mission really is to change the way people travel. It’s also what Z-Triton really claims to be: the most fun, sustainable and unique way to travel, ”says Aigars. He also likes to bring happiness and smiles to people’s faces and give them the opportunity to reconnect with nature.

The company started in 2018 with the intention of creating meaningful projects that positively contribute to the planet. The unique little house does just that, enhancing the lives of humans and the Earth they inhabit. Today, Zeltini is primarily focused on the manufacturing aspect of the company. They are teaming up and prototyping to get the Z-Triton ready for the market in the summer of 2021.

Currently, you can book a small house on the website, but for now they are only being delivered in Europe. However, once they run initial tests on product quality and get feedback from customers, they will start shipping overseas. Zeltini also plans to hold test rentals and public demonstrations as early as this summer.

The story behind the revolutionary tiny home business

Taken from the website, “There’s a pretty unique backstory to Z-Triton. Aigars, the Founder, cycled from London to Tokyo and came up with the idea for an amphibious e-camper while staying in Shanghai for a few months. Z-Triton is their version of a touring bike upgrade. “

From 2013 to 2017, Aigars embarked on a solo cycling adventure across Europe and Asia. In total, it covered a whopping 30,000 km and stopped four times along the way. He worked as a designer in Istanbul, Dubai, Singapore and Shanghai. While taking a break from traveling in Shanghai for a few months, he got the idea of ​​how to improve the tourism cycle.

the little house The boat bicycle was born, and he got to work creating sketches and the first model of the product. After creating a mockup, he began testing at a local park near his apartment. Returning to his native Latvia in 2017-18, Aigars began setting up his prototyping and design studio, Zeltini.

In 2018, Aigars and his team began the hard work of initial prototyping. They employed 3D modeling, CNC milling, woodworking (Kārlis Zemītis), metallurgy (Gatis Kreicbergs), 3D printing, and a lot of creativity to create the alpha Z-Triton prototype. Last year, all of your hard work finally paid off. The final prototype was complete and the fun part began. They took out the small house for testing in the water, the busy city streets, and the nature trails.

After posting the product on social media, it quickly gained traction. Customers can now reserve their own houseboat on wheels, although shipping will only take place in Europe for now. The company expects to ship worldwide once more trials and tests are completed.

The Z-Triton little house / boat / bike will change the face of the industry forever. Now, people do not have to stay in one place in their small house. They can also take it out for a spin or a boat ride! There really is nothing like it out there and hopefully it will catch on around the world.

Would you buy one of these little houses? Let us know in the comments!

3 Positive Ways To Curb Bad Behavior In Children Without Punishment