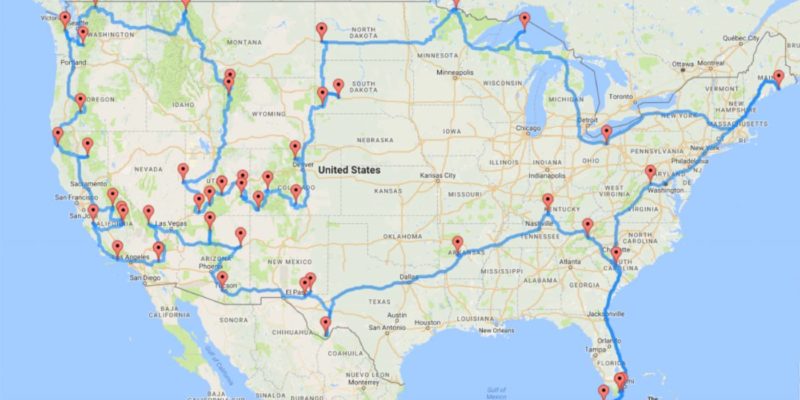 
Smart algorithms are used to do calculations for data-driven science in a dizzying number of ways, but one man has used them to build a once-in-a-lifetime American experience.

Dr. Randy Olson has created an algorithm that planned the ultimate and optimal road trip of the US National Parks, presenting the most convenient route to visit the original 47 National Parks in the continental United States.

The modern National Park System was inspired in part by the growing popularity of the automobile, and the US interstate highway system was built to traverse as many US parks as possible.

As can be seen in the Ken Burns documentary The National Parks, In the 1960s, taking your Ford or Chevy on a trip to the West was the quintessential American vacation and the crown jewel of the tourism industry.

The total trip is 14,498 miles (23,333 km), not counting rest stops, and it will take approximately two months to drive to what Olson described as a “breakneck pace”, although anyone looking for an enjoyable road trip will want to enjoy the scenery in each park and will realistically need more than 3-4 months to do this adventure justice.

Olson, who is FOXO Bioscience’s Chief Data Scientist, described the trip as a “circle,” meaning that you could jump on the route at any point and go in any direction to visit the next 46 parks. It is by no means a circle around the perimeter of the US.

For example, when you begin your travels going west from the lakes of northern Minnesota, your route descends south from North Dakota to the New Mexico-Colorado border. It snakes west into the Great Basin in Nevada, and climbs back up to Glacier NP on the Canadian border.

This massive detour is due to one of the five or six mega states of the National Park System, Utah, and its central location. But beyond that, the journey is well planned, as one can start at any point and face the same amount of driving as if they had started anywhere else.

Olson’s blog post about his route was a popular topic with his readers, and they enthusiastically flooded the comment section with tips, gas cost calculations, advantages of RVs over traditional sedans for better road performance. gasoline and other details.

One commenter mentioned that removing Florida parks and Acadia National Park in Maine would save a lot of time.

Another popular debate concerned other types of land units managed by the National Park Service, such as National Scenic Waterways, National Monuments, and National Lake Shores. These define the spirit of the NPS, which is not only to protect the lands that the nation values ​​most, but also those that individual communities value.

Other tips to optimize your trip include this detour through New York to Maine, which would go through the mountains instead of the interstate, or this resource for finding free campsites online managed by the U.S. Bureau of Land Management, which can save travelers lots of dollars on lodging.

CHECK: Americans Pick The Best Road Trip Songs Of All Time For Their Summer Playlist

Olson notes that you would need to have a car or flying plane to efficiently visit the 12 parks located in the US island territories, or in Alaska, where there are eight parks, but your road trip includes the Channel Islands and Dry Tortugas, that require the use of car boats and personal transportation.

Besides a car and a camera, the most important thing you need is to get the National Parks Passport, which allows you to collect stamps (such as visas) at each visitor center, and the America the Beautiful Pass That, for a one-time fee, allows free entry to almost all NPS positions – it costs $ 80 for one year.

Also, if you, like probably most of us, cannot create an algorithm on your own, RouteXL.com will optimize other road trips for you with up to 20 free stops and more stops for a fee.

PREPARE your favorites for an epic journey by sharing this story …

Review: Orly’s Lisa Frank Nail Polish and Stickers Send Me Back to Childhood