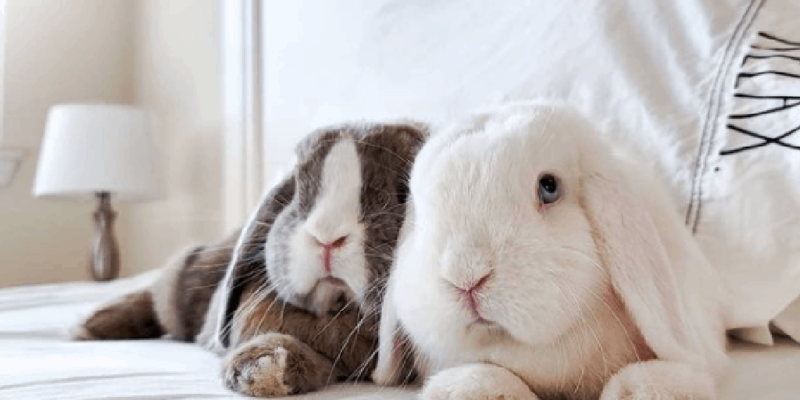 With their long, floppy ears and plump bodies, Holland Lop bunnies give us plenty to smile about. They are simply adorable, and even if you don’t have any, just looking at them online will brighten your day.

Sky and Grace, both two-year-old Holland Lop bunnies, cheer on people every day on their social media accounts. Called “Stayathomebun,” their accounts include photos and videos of them playing, eating, and adorably posing for the camera.

The owner of the rabbits also could not resist the charm of Holland Lops. It’s hard not to love such a fluffy little creature that jumps and chews carrots all day.

“I fell in love with bunnies because they are so cute. Motor noses, fluffy legs, beautiful eyes, and all their adorable little gestures”Says the owner about why she loves bunnies.

She didn’t always have bunnies, but after taking care of a few she got hooked.

“A few years ago, I volunteered at a rabbit rescue and helped take care of an entire house full of rabbits. After a few months of volunteering, I decided that I wanted to take care of my own bunnies. “

Rabbits have a fairly easy life, full of eating, sleeping, jumping, and being petted by their owners. Rabbits don’t know how good they have it.

Its owner says this:

“I once heard that the life of a bunny is something like, nap until hungry, then eat until sleepy and repeat. Sky and Grace love to eat, nap, lie, and bite. They get very excited when they know they are going to eat fresh vegetables and treats. Bananas are his favorite snack. “

Their owner even taught them to ring a bell! Every time they paw it, she gives them a well-deserved gift. When the hop bunnies aren’t eating or sleeping, the owner takes them on some adventures.

“Once, we took Sky to Times Square in New York City to see Samsung use their photo on a billboard. I also have the quiet moments where they just come up to me and flop sideways next to me. There is something therapeutic about spending time gently stroking a happy bunny. “

Some interesting facts and tips on caring for Holland lop bunnies

“Rabbits have scent glands on the underside of their chin and they rub something on their chin to mark it as their own,” explained the bunny mom. “Then Grace will do something. Then Sky will come up, smell it, and miss it. Then Grace will come back and do the same. It is fun to watch.

They also move very fast. When they get excited, they come up and do this winding jump called a binky. Sometimes Sky and Grace will combine zoomies with a series of binkies. He is so cute “.

In its Instagram Mind you, the owner posts his antics often so people can see them by zooming and jumping. He also posts tons of videos of them doing their favorite activity – eating. Rabbits need a ton of food, mostly in the form of vegetables, fruits, hay, and granules.

“Rabbit teeth never stop growing, so they need a lot of hay to chew on,” explains the owner of the lop bunny. “Hay is very important because rabbits need a lot of fiber to keep their digestive system on track. And be careful with your cables because the cables are easy to chew on. “

Holland lop bunnies originally came from the Netherlands, where they were created by Dutch breeder Adriana de Cock. He wanted to breed a miniature French lop successfully, so he bred French lops with the Dutch dwarf. However, the ears were still pointed rather than flabby, a characteristic trait of lops. So to create the ears, he strengthened the lop gene by raising the offspring with English lops.

The Rabbit Board of the Netherlands formally accepted this breed in 1964. It was recognized by the American Rabbit Breeders Association (ARBA) in 1979.

In the UK, the equivalent of the Holland lop is the Miniature Lop, which is recognized by the British Rabbit Council. This breed of rabbit is even smaller than the Dutch version. There is also a breed called the American Mini lop, a totally different breed from the UK Miniature lop. Now that you’ve had a little lesson on rabbit breeds, let’s get back to lops.

Holland lop bunnies are known for their small, compact size and robust, round build. Part of what makes them so adorable is their plump bodies offset by their floppy ears. This combination of physical characteristics, along with the bunny’s docile and friendly temperament, makes it a popular pet. Holland lop bunnies are great with kids too, so they make wonderful companions to have around.

They weigh between 2 and 4 pounds and have a lifespan of approximately 7 to 10 years. Fortunately, Holland lops are pets that require little maintenance and do not have many inherited health problems. Your coat will need to be brushed about once a week to prevent matting. They are groomed often, but removing loose hair with regular brushing reduces the risk of your bunny swallowing hairballs.

Make sure you have plenty of hay, granules, and fresh fruits / vegetables on hand. Also, give your bunny plenty of room to roam freely, both indoors and outdoors.

Sky and Grace’s owner gives one last piece of advice: “Last but not least, they also need a lot of free time to nap, get ready, and feel at peace with the world.”

Final thoughts on meeting this pair of Dutch lop bunnies

We hope these beautiful Holland lop bunnies put a smile on your face because they sure did it for us! After looking at Sky and Grace’s Instagram, you might even be tempted to adopt a bunny yourself. If you decide to get one of these adorable companions, be sure to research breeders before purchasing one.

It’s easy to see why so many people have fallen in love with Holland lop bunnies. They are plump, stocky, lop-eared and spongy. So what won’t you love about them?