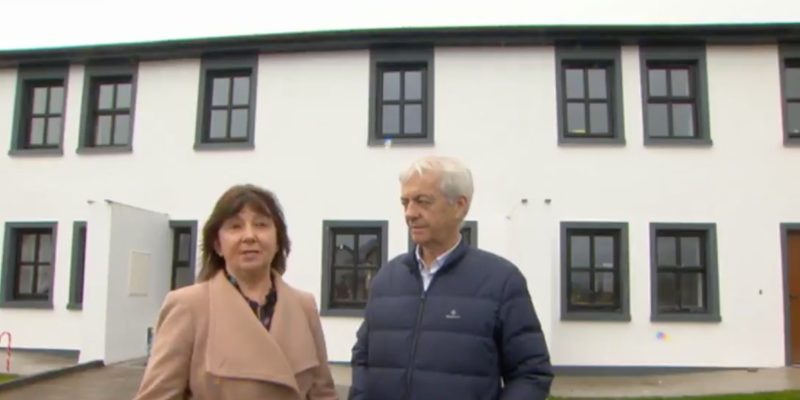 
As the song goes, “There is no place like home for the holidays.” Now, thanks to a pair of forward-thinking business owners in County Kerry, Ireland, three families will move into company-subsidized housing in plenty of time to see Santa come down the chimney, and that’s just to get started. .

Patricia and Tony Walsh, owners of Walsh Color Print and Educate.ie employ nearly 120 people. Patricia explains that the work they do requires a specialized skill set. Since they had not been able to find enough candidates for local jobs to fulfill the requirements, a good part of their workforce comes from other European countries.

Unfortunately, with the limited and expensive housing options in the area, many employees simply couldn’t afford to save for their own places while paying high rents.

Two of those longtime workers were Anna and Marcin Wojs, who have been with the Walshs since they immigrated to Ireland from Poland 16 years ago. Faced with the possibility of having to go home despite wanting to stay, they brought Patricia and Tony’s attention to their dilemma.

For the husband and wife team, the answer seemed obvious: find a way to offer an affordable housing alternative as an incentive to keep their employees in the family fold.

CHECK OUT: What started as a daddy joke led to the delivery of 15,000 cookies to essential workers

So, in 2017, the couple applied for planning permission to build non-profit housing extensions on land already owned by Walsh Color Print. The Clonaugh site has capacity for 70 units, 20 of which have been dedicated to company workers.

Built on a non-profit basis, the 1,000-square-foot attached houses are sold to employees at approximately € 30,000 (approximately $ 36,500) below market value. To offset the costs, the other 50 units will be sold at full value on the open market.

With the construction of three houses now complete, the Wojs family were the first to move into their new home and have already begun decorating the hallways. Employees who purchased the remaining two homes are expected to ring in the new year in their new homes as well.

Tony Walsh notes that there will be an informal agreement with employees who purchase homes to stay with the company for the next 10 years. While he sees the move as a way to ensure a stable workforce, he also believes that home ownership will be a key factor in ensuring a stable future for his employees when they finally retire.

PLUS: ‘Secret Santa’ just paid for every layaway item for all shoppers at Mississippi Walmart

“Mercin, Anna and their family are delighted,” said Tony Walsh. RTÉ News. “For the first time in their lives, they have something. We’re going to implement this now for the rest of our staff, and at the end of their time, when they’re done working with Walsh Color Print and Educate.ie, they can close the door and say, ‘We own this. ‘”

Construction of the next stretch of homes is scheduled to begin next month. According to Patricia, providing affordable housing is already proving to be an employment advantage that benefits both employers and employees, and she wholeheartedly hopes that other Irish companies will emulate her example.

RELATED: When a Toronto pub admits that it needs money for rent, the neighborhood swoops in to buy its entire beer stock

Meanwhile, Mercin, Anna, and their children are grateful to be home for the holidays. “It’s the best Christmas present ever,” said Anna. “The feeling now is that we are happy, just happy.”

Three families in North Kerry are preparing to move into new homes developed for nonprofits by the company they work for. All were purchased below market value and plans are underway to build 20 more houses for the employees. pic.twitter.com/xOJc2KPBGT

Why Your Hair Isn’t Growing