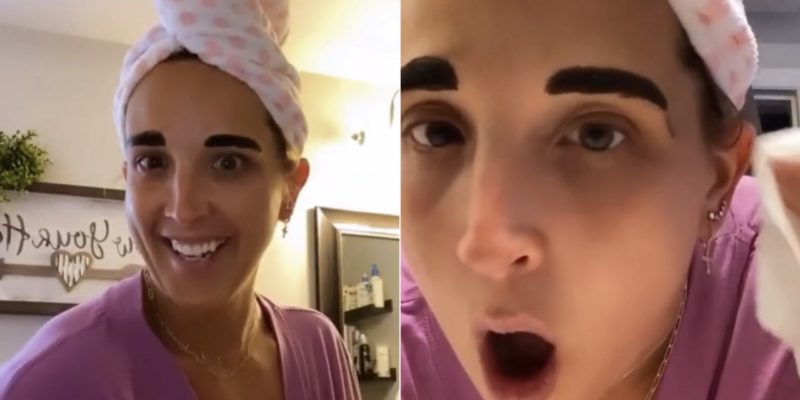 Over the past year, so many of us tried to take on some of the beauty duties we’d always assigned to professionals. Stay-home orders and social-distancing recommendations led to lots of at-home haircuts and hair-color changes, while wax lovers either attempted to remove unwanted hair themselves or just throw in the strips and let it grow. And now, even though many salons and spas are running at full capacity again, some folks are understandably trying to save a little money or time by trying beauty treatments at home. For one TikTok user, however, a DIY brow-tinting session turned into a viral lesson learned the hard way.

Casey Watson Southern, who goes by @caseywsouthern on TikTok, posted a video on April 30 in which she chronicles tinting her own eyebrows at home. And right off the bat, we get some foreshadowing when she reads the instructions — and proudly ignores them. “A thin layer of petroleum jelly or Vaseline around the eyebrows to help make sure that I don’t accidentally stain the other skin — but y’all know I ain’t doing that,” she says.

She nervously applies the dye — it appears to be a product called Godefroy Instant Eyebrow Tint — with what appears to be an orange stick and then shows viewers the decidedly ridiculous way it looks once fully painted on: very dark, messy, and opaque. “This is such a good look,” Southern jokes. But she may have to learn to really feel that way about it because she realizes she’s left it on a little longer than recommended.

“It says to damp a paper towel and get it off with the paper towel,” she says, but when she tries, the dye doesn’t budge. “Oh my god. Oh my god,” she repeats over and over.

In a second video, Southern seems to be scrambling to remove the dye with even more urgency, “This is a catastrophe,” she says. “This ain’t a vibe no more. This is it. I have stained my skin. I am taking alcohol, trying to get it off because I don’t know what else to use,” she says.

Based on videos she’s posted since the incident, it seems she was successful in eventually removing it — Allure reached out to ask if the alcohol and elbow grease did the trick but we haven’t heard back yet. New York City-based colorist Nikki Ferrara says the alcohol could have done the trick, but baby oil can also help.

Peek Inside One of the Largest Big Cat Rescue Sanctuaries