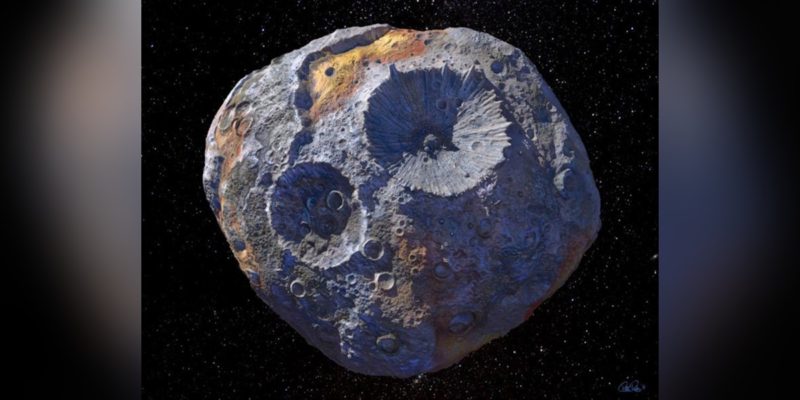 
Between Mars and Jupiter in the solar system’s asteroid belt, there’s a chunk of iron and nickel called 16 Psyche that’s worth $ 10,000 trillion – that’s 70,000 times more than the entire world economy.

With measurements of its density paired with its 140-mile diameter, recent telescopic studies with different spectra of ultraviolet light have confirmed that the asteroid is around 90% iron, adding the last value in the equation to give 16 Psyche its huge price.

Located 230 million miles from Earth, it offers a very different kind of value for scientists, namely studying one of the largest all-metal objects in the solar system, one that scientists believe could be a protoplanet that got disrupted. during natural formation.

It is now the subject of a NASA Mission 2022 that it will send an orbiter on a 3.5-year mission to study a new kind of world made of metal.

The orbiter will try to determine if it is simply a mass of iron and nickel, or indeed the core of a planet, as well as its age, and if it can contain lighter elements found in Earth’s high-pressure core.

“We have seen meteorites that are mostly metal, but Psyche could be unique in that it could be an asteroid that is entirely made of iron and nickel.” said Dr. Tracy Becker, 16 Psyche expert at the Southwest Research Institute.

“The Earth has a metal core, a mantle and a crust. It is possible that while a Psyche protoplanet was forming, it was struck by another object in our solar system and lost its mantle and crust. “

Becker, who published an ultraviolet light observation study of the asteroid last year, sees it as an opportunity “to understand what really constitutes a planet and to potentially see the interior of a planet.”

RELATED: Huge balloon the size of a football stadium to launch the telescope to the edge of space to study how stars form

But how is it possible for so much heavy metal to congregate outside of a festival site in Germany?

“It’s not the Death Star,” says Elkins-Tanton. “Turns out we know this from meteorites; than the most primitive material, the building blocks of planets [are] little bits of metal and bits of rock, all mixed together. “

“And when you put all that stuff together in one [a tiny planet] they are heated by the first short-lived radioisotopes, ”he said.

This fusion forces the metal downward, as it is denser than the comparatively porous rocky material present on the asteroid or planet, forming the metallic core.

PLUS: Cold planets exist throughout our galaxy, including in the galactic bulge, scientists discover

“We have a large group of metal, our core, inside the Earth,” Elkins-Tanton said. “There is one inside the Moon, surprisingly, inside Mars, inside Mercury, inside Venus, but we never, ever get to see them. So Psyche gives us, we think, a way to see the nucleus of a planetesimal, perhaps the only way that humans will see a nucleus if our ideas are correct. “

This would be the true price of 16 Psyche, because even if we could somehow get all that iron back, the laws of supply and demand in the economy would lower the price of iron to levels of hundredths of a cent.

From Cheeky Bears to Goofy Gophers, See the Fun Finalists of the Comedy Wildlife Photo Awards