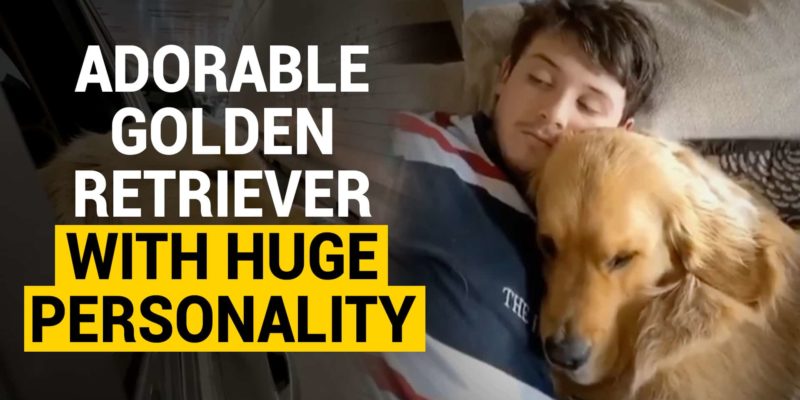 
Golden retrievers are one of the most popular family pets for many reasons. They are friendly, playful, loving, affectionate, and cuddly, not to mention they have hearts of gold! Of course, they are also majestic and beautiful dogs on the outside, but they shine even more on the inside. This hardworking sporty dog ​​is loyal and highly intelligent, making him irresistible to any dog ​​lover.

Goldens are also known to have a goofy personality; They love to make people laugh! Since they are so open and friendly with strangers, they don’t make good watchdogs. However, they make up for it with their positive energy and enthusiasm for life. Whether you are curled up on the couch or walking in the mountains, a golden retriever will be faithful by your side.

A Golden Retriever named Sterling lives up to his raise description to a T. He is the centerpiece of the family, and is never left out of events or activities. When you have a Golden, you will naturally want to spend as much time with them as possible. After all, dogs have been known to cheer you up and calm you down simultaneously, especially the good-hearted Golden.

Next, we introduce you to Sterling the Golden Retriever, a comedian and thief of clothes and hearts.

“What he likes to do the most is steal clothes. So every morning he goes upstairs to someone’s bedroom and skips down the stairs with something in his mouth, ”says his owner. “And then usually he takes it out into the garden and drops it. Then I have to go pick it up. He also refuses to go back in the door unless I give him a gift, so we call that tax. “

The two-year-old puppy with a great personality

When Sterling isn’t making his family laugh with his kleptomania, he enjoys bonding with them in other ways. Basically, whatever the family is up to, Sterling wants to be included, too. It is no wonder that dogs have been man’s best friend for centuries; they are beautiful creatures. Without saying a word, a dog can change your day or your life and give you renewed strength and purpose.

“I have to say that it has changed our lives in many ways and has brought the whole family together more than we already were,” says her mother.

“I am lucky enough to stay home, so I spend most of my days with Sterling. Our favorite activity is going on adventures. So we are lucky to live near a lake so we go down to the lake and he can swim in the water. And we go to a lot of parks, and then I take him for a walk and we have puppuccinos. Sometimes we have lunch and it’s fun to hang out together, ”she says.

Many dogs enjoy Starbucks’ whipped cream treat, the puppuccino. While humans may stare at plain whipped cream with boredom, dogs eat it (literally!) If you don’t have a human best friend, a dog is a wonderful companion. They can do anything people can do, as the owner of Sterling described above. Whether you’re out for lunch or exploring nature, a Golden Retriever would love to be with you!

Sterling’s mom (and his entire family) appreciate him beyond words. He has given them so much love and comfort, and their lives would not be the same without him around them. If you get a Golden Retriever, you will always have a best friend for life.

Sterling, the Golden Retriever, is truly one of a kind.

Golden Retrievers also age very well and never seem to lose their cuteness! You can cuddle them as puppies and adults, and you will never get old. Sterling’s mom, Diane, who runs his social media pages, spend most of the time with him. You’ve seen it grow and now it’s two peas in a pod.

“I would say that probably the best memory is the day we brought him home. It was just a cute little fluff ball, bouncing around the house and then falling asleep, ”says Diane. “He was just adorable and obviously still is. The most rewarding thing about having a dog is the unconditional love it gives you. They are always happy to see you, they don’t judge you and they give you a lot of satisfaction in life. “

It’s easy to see why the beloved Golden Retriever continually makes the list of the top ten best dogs in the family. They don’t bark much, have a tolerant temperament, and are some of the most lovable dogs out there. They are also very energetic and fit in well with an active family. However, they adapt easily and can also loiter around the house if you are more discreet.

The Golden is also one of the most popular therapy dogs due to its calming and caring nature. His empathy and unconditional love help heal the hearts and souls of many, from war veterans to the elderly and anyone else.

“If I were to give advice to someone looking to get a puppy or even rescue him, I’d say the first few months can be quite difficult, especially with puppies,” says Diane. “They bite a lot, they need a lot of attention. Once you’ve made it through the first few months, things will get easier. It’s the best I’ve ever seen, and they are a very important part of your family. “

Final thoughts on the Golden Retriever that will steal your heart

While the Goldens have similar personalities, Sterling is noted for his strange habit of stealing clothes. It is clear that he loves to make his family laugh and that he will do anything to put a smile on their faces. However, you could be following your instincts, as retrievers have been bred to search for animals or items.

Even though his family has to pick him up, they love Sterling to pieces. He has changed their lives for the better, and each day they spend together is a blessing in his book.

The rules of the road are changing in GB, benefitting walkers and cyclists