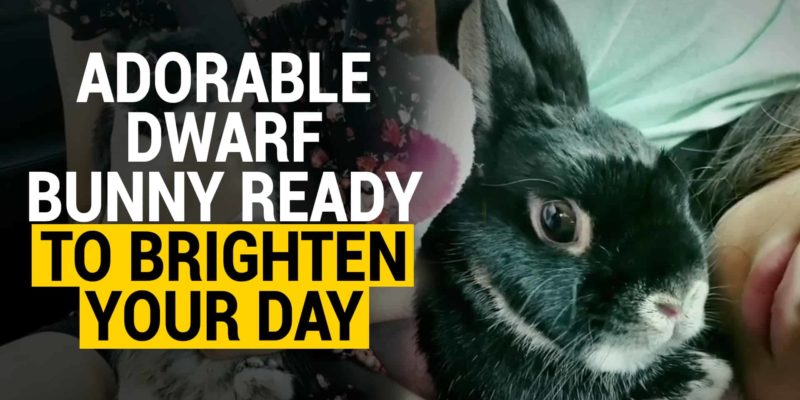 
Have you ever seen a dwarf bunny? If not, you’ve definitely been missing it! Dwarf rabbits come in several varieties, from the Holland Lop to the Netherland Dwarf. In case you were wondering, they are all equally adorable and fun-sized!

However, being small does not automatically mean that a rabbit is a dwarf. In reality, some tiny bunnies are not classified as dwarfs. To be a dwarf rabbit, the bunny must carry the dwarf gene. Rabbits with this gene are not just small; they also have a compact body, a rounder head, and shorter ears.

In this world, cuteness sells, many people buy dwarf bunnies because of their small size. Aside from the “cute factor,” smaller bunnies also create less clutter and need less space than larger rabbits. Not to mention, they don’t require as much food, which makes them a bit less expensive.

While getting a dwarf bunny may look attractive, they require specialized care due to their size. These little bunnies tend to suffer more respiratory problems due to their smaller nose and mouth. As a result, they may require more frequent visits to a veterinary for treatments. Due to their size, pet owners must handle these little critters with care, keeping in mind their delicate nature.

More about the Dutch dwarf bunny

These rabbits, known as a true dwarf breed because they carry the gene, live for about 10 years on average. They weigh up to 2.5 pounds and originate from the Netherlands (if you haven’t already guessed). The breed was first recognized by the American Rabbit Breeders Association (ARBA) in 1969.

The association classifies Netherland Dwarf rabbit colors into five categories: self, shady, agouti, tan, and other varieties. These bunnies come in more than 20 colors, including the following:

They have compact bodies, large heads and eyes, and short ears and faces. Their ears are erect, short and rounded at the tip. This combination gives them that round but petite look that steals everyone’s hearts on a daily basis! Seriously, it should be illegal to be so cute.

The personality of these adorable creatures varies from bunny to bunny. Some may want more affection, while others prefer to be left alone. However, with any rabbit, it is important to build trust slowly and let the rabbit make the first move. After giving him some delicious treats and being patient with him, your bunny will likely start to become more attracted to you.

History of the Dutch dwarf bunny

The ancestry of the Dutch dwarf rabbit includes the Polish and hermelin rabbit breeds, among others. The Polish rabbit probably originated in England and the Hermelin came from Germany. Breeders in the Netherlands began breeding the tiny white rabbits with small and large wild rabbits to create more diverse colors. They developed a breed standard in 1940, but World War II stopped their work.

Taking care of your fun-sized friend

Dwarf rabbits have the same basic needs as any other rabbit. As long as they have a warm and welcoming home, healthy food, and loving owners, they are ready for life. They can eat occasional treats, but most of their diet should come from hay, vegetables, and granules. Make sure their cage or living space offers enough space and give them free time as well.

In terms of grooming needs, rabbits tend to clean themselves for the most part, like cats. However, you will still need to trim his nails and brush his fur daily. Now that you know all about this adorable breed of rabbits, we present one to you.

“It was really love at first sight when we all saw Minuit,” said owner Catherine Rossi. “On the spot, our daughter called him Minuit, which is French for ‘midnight.’

The Netherland Dwarf rabbit is now three years old and was only eight weeks old when the family adopted him. On August 3, 2017, they drove three hours out of town to a shelter to meet him.

“A year later, in December 2018, our daughter asked us if we could enter Minuit in a costume contest, which required us to enter him with an Instagram account, which neither of us had,” Catherine said. “It was then that we realized that Minuit did not mind dressing well and we thought he would pose in front of the camera.”

Since then, Minuit seems to love the spotlight! He likes to strike a pose and wear all kinds of adorable costumes. He is also very calm and behaves well when out in public. He never needs a leash because he does so well with strangers.

“People are often intrigued when they see a bunny with us in public. But Minuit’s cuteness always puts smiles on people’s faces, ”says Catherine. “The advice I would give to people interested in owning a pet is to do their research first. You have to make sure that the pet you are interested in fits into your lifestyle and that you provide the necessary space for your pet. “

To all animal lovers, we apologize for the cuteness overload. You probably want to find your closest breeder and get your own dwarf bunny. And we wouldn’t blame you if you did! These pocket pets I have so many positive qualities. It’s easy to see why so many people love them.

Have you ever seen a dwarf bunny in person? Let us know in the comments!

A Conversation with Bob Sadler