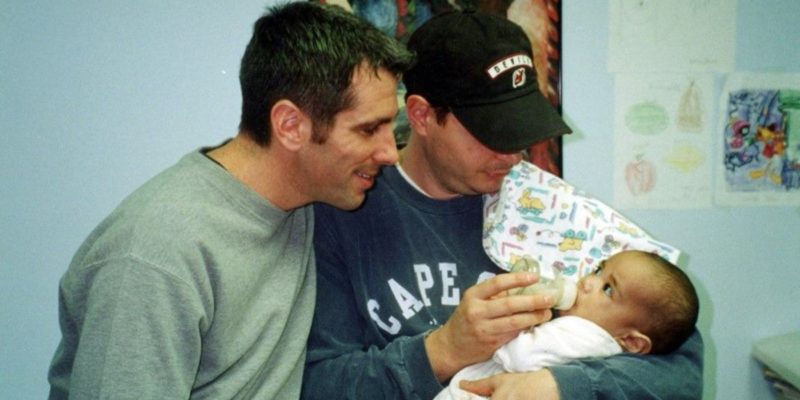 
When it comes to “where babies come from,” some stories about impending fatherhood can be quite implausible: babies born through the stork, babies appearing under cabbage leaves, babies arriving on the subway.

But as hard as it may be to believe, the latter is true, at least in part.

In August 2000, Danny Stewart was rushing to make a dinner date with his partner, Pete Mercurio, and was late when he spotted a suspicious lump on a New York City subway platform. Thinking at first it was just a doll, Stewart was quick to follow, until something caught his eye.

The doll was not a doll at all. It was a baby, a newborn, with the remains of an umbilical cord still attached.

While cell phone technology wasn’t new a couple of decades ago, it still wasn’t ubiquitous back then. So Stewart was forced to search for a public phone on the street to alert the police to his find.

After checking back on the baby, she made a second trip to the phone to alert her partner. Mercurio was out the door in an instant and arrived moments after police took the baby into their custody.

“I remember turning to Danny and saying to him on the sidewalk as the police car drove away, ‘You know, you’re going to be connected to that baby in some way for the rest of your life.’” Mercury recalled to the BBC.

“Danny was like, ‘What do you mean?’ I said, ‘Well, eventually, this kid will find out the night they found him and maybe he wants to find the person who discovered him.’ Maybe there is a way to find out where it ends and send her a birthday present every year on this date? ‘”.

READ: Mom, it’s me! Woman meets her son who was put up for adoption 45 years ago and confirms that she made the right decision

Stewart and Mercurio were in their early thirties and neither had plans to start a family at the time, but fate had other ideas. While they didn’t know it yet, the abandoned baby would soon become a permanent fixture in their lives.

In December, Danny was asked to attend a family court hearing to offer testimony about how he had found the baby for the first time. At the end of the procedure, the judge surprised him by asking if he would be interested in adopting the child.

He surprised himself, and Mercury, by saying yes.

It was a decision that initially caused great discord in their relationship. The couple admit that the situation almost broke them, but eventually, Mercurio promised to bring the baby home as well.

CHECK: Peter and his newly adopted son just fostered a foster teenager and now share affirmations for all races

In addition to having the authority to expedite the adoption process, Mercurio believes the judge also displayed keen insight that day.

“[She] He said that all babies needed a connection with someone. And so when Danny was testifying in the courtroom about the discovery of the baby, in his mind, his most serious connection in the world was with Danny, so why not just ask him? Mercury told the BBC. “It was almost as simple as that. He saw a connection that was already established and had a feeling that it would be the right connection. “

The baby, whom the couple named Kevin, in honor of a stillborn brother Mercurio’s parents lost as a child, was handed over to their care just before the Christmas holidays. Now 20 years old, he has been with them ever since.

In 2011, when gay marriage was legalized in New York, it was Kevin who asked if the judge responsible for his adoption would be willing to perform his parents’ wedding ceremony. She was very happy to officiate.

MORE: Co-workers become best friends and then find out that they are actually biological sisters

While traditionally vows come before a baby, even when a baby comes before vows (and was found on a New York City subway platform, too), as Kevin and his two dads may tell you, the true meaning of family is not limited. By convention, it is defined by love.