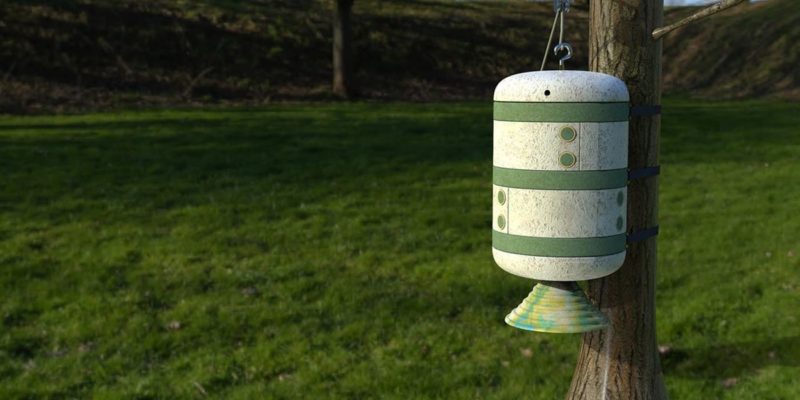 
An Irish designer hopes to save her island’s native bee species by creating special hives grown from mushrooms.

Placement in the World Top 20 for the James Dyson Design Award for Sustainability, the prototype hive, called Econooc, is being designed specifically by Niamh Damery for the Irish black bee, as well as to involve more people in conservation.

The decline in bee populations in Ireland is not just the result from habitat loss or pesticide use as is common elsewhere, but also because for years the country imported populations of bees from warmer climates that have a hard time surviving the Irish climate.

Those introduced species were bred with native bees to create hybrids that invaded black bee hives, but still couldn’t cope with the weather. Econooc hives are grown from mycelium spores spread over an agricultural by-product, such as wood chips or straw, called a substrate.

Mycelium is the fibrous underground structure that supports the fruiting body (the fungi we see on walks) and is emerging as a potential super design tool. GNN has reported its use to do things as varied as bricks, canoes, and even coffins. The mixture of mycelium and substrate is stuffed into a mold to mimic the natural structure of a hive, before putting it in the oven to preserve the shape.

Econooc simulates the hole in a native tree where black bees tend to build their hives to protect themselves, their food and their young from the rain. A landing pad where owners can see bee activity inside and outside the hive is made from recycled plastic, while the straps that secure it to the tree are old seat belts, making it almost entirely recycled or sustainable. .

Damery also worked to create a calendar, to be included in the purchase of each hive, that each month educates the owner about the different native plants growing in that period that require Irish black bees for pollination, as well as what exactly is happening inside. . the hive during that season.

Also, after the month is over, the homeowner can tear off the bottom of the calendar, which is filled with wildflower seeds, and place it under an inch of soil in their garden to further aid in efforts to save bees. black women and other Irish animals. pollinators.

As soon as the Econooc is ready for the market, we will make sure to let you know.

(LOOK the James Dyson Foundation video on this story below).