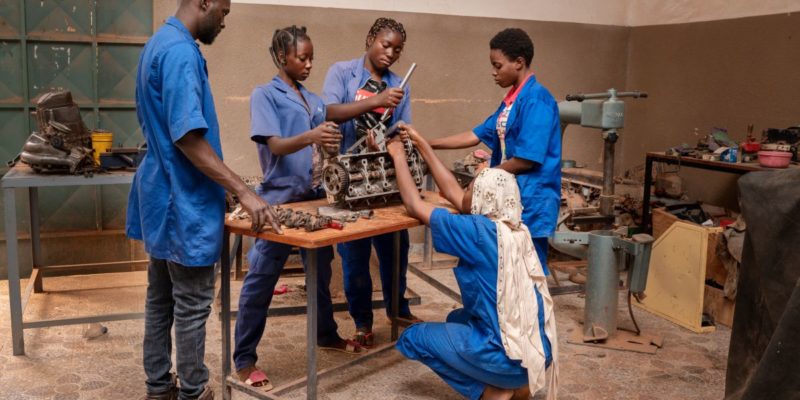 
Being a young woman in an African Muslim country generally means staying home and raising children.

But in the hot and dusty outskirts of Burkina Faso’s capital Ouagadougou, girls and women from often disadvantaged backgrounds are being trained to become something quite different: car mechanics.

At CFIAM Center, students are laying the foundation for their future in professions ranging from mechanics to electronics, while daring to shake up the country’s long-standing traditions.

Until now, car work has been considered exclusively suitable for men in Burkina Faso. But this is also a country with high levels of youth unemployment, particularly among young women, and where a wave of extremist Islamic beliefs and terrorism has slowed very significant positive change. The classes then help women to point out, with greasy hands, the possibility of a career: a chance for independence and security for themselves and their families.

If someone wants to love me, they must accept that I am an emancipated girl

The school houses nearly 200 students, who study eight hours a day, six days a week in a series of challenging classes, from math to French. Intensive hands-on courses include auto and body electrics.

“People don’t believe it when I diagnose a problem with their car, and I dismiss it as ‘girl talk,’” says Rookia, 27, who first attended auto mechanic classes downtown in 2016. “But When it comes to men and marriage, if someone wants to love me, they must accept that I am an emancipated girl. “

Main image: Girls with the teacher during an auto mechanics class at the CFIAM women’s school in Ouagadougou. Credit: Valentina Piccinni