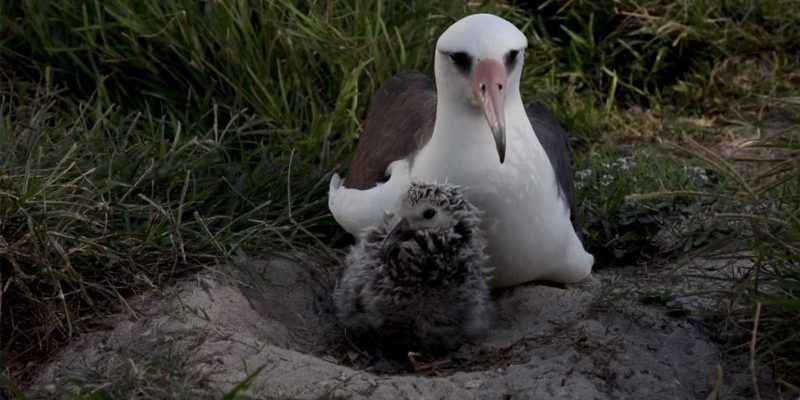 
The oldest known wild bird in the world, a Laysan albatross named Wisdom, brought another chick this season at age 70.

Every year millions of albatrosses return to the Midway Atoll National Wildlife Refuge to their same nesting site and are reunited with the same pair.

In the world’s largest albatross colony, Wisdom and her partner, Akeakamai, have been incubating and raising chicks together since at least 2012, when biologists first banded the male.

“At least 70 years, we believe Wisdom has had other mates,” said the biologist with the US Fish and Wildlife Service. “Although albatrosses mate for life, they can find new mates if necessary, if they survive their first mate “.

Albatrosses don’t typically lay eggs every year, and when they do, they only lay one egg.

Biologists estimate that Wisdom has given birth to at least 30 to 36 chicks in her lifetime. In fact, in 2018, biologists observed that the chick they fledged in 2011 returned to the site just a few meters from their current nest.

POPULAR: ‘Like a beautifully tuned instrument’: 2000 microphones uncover the mystery of why hummingbirds hum

Almost as amazing as being a parent at 70 is the number of miles Wisdom has flown; By the time she was 60, she had traveled at least 2-3 million miles since she was first ringed in 1956. That’s 4-6 trips from the Earth to the Moon and back with many miles to spare.

One of the reasons for all these frequent flier miles is that each Laysan albatross spends its first 3 to 5 years fledging at sea, never making landfall.

“With each year that Wisdom returns, we learn more about how long seabirds can live and raise chicks,” said Flint. “His return not only inspires bird lovers everywhere, it helps us better understand how we can protect these graceful seabirds and the habitat they need to survive in the future.”

Wisdom has likely flown 50,000 miles each year as an adult, and countless generations of albatrosses have a similar long-distance family reunion in Midway Atoll each year.

Albatross parents share the incubation tasks for 65 days and once the chick hatches, they share the feeding tasks. The chicks fledge and fly for the first time in June and July.

Almost 70% of the world’s Laysan albatrosses and almost 40% of the black-legged albatrosses, as well as the endangered short-tailed albatross, all depend on Midway Atoll. Another 20 species of birds breed here, with a total of more than three million individual birds that call the Refuge home.

MORE: The birds in San Francisco began to sing differently in the silence of the pandemic shutdown

The refuge, at the northern tip of the Hawaiian archipelago, is managed cooperatively by the US Department of Commerce, the Department of the Interior and the State of Hawaii. To date, more than 275,000 albatrosses have been ringed at the Refuge. Thus, biologists can make more informed management decisions that ensure seabirds have the habitat and resources they need in the future.

To support the conservation work of volunteers and staff working to restore habitat and eliminate invasive species, you can donate on the website of Midway Atoll friends here:

LOOK an amazing video of Wisdom taking care of his girl …

FLY this tenderness to your group of friends on social networks …

Amazon, Unilever, and Nestlé join the UK, US and Norway in New $1Billion Initiative to Preserve Tropical Rainforests