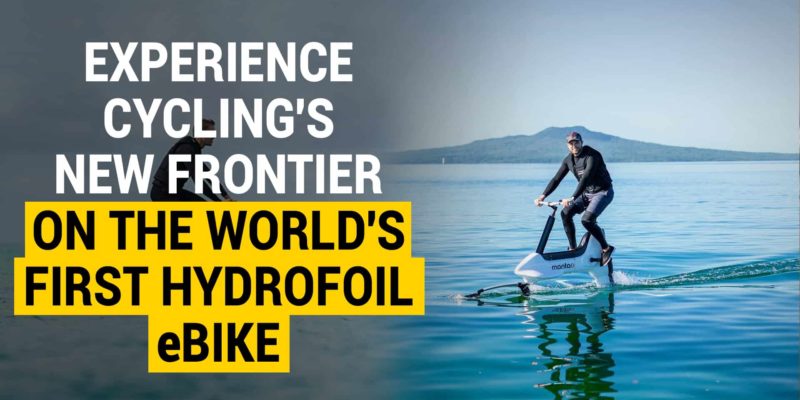 
The world’s first hydrofoil bike lets you ride your bike on water, giving you a workout and great views simultaneously! Called the Manta5 bicycle, it was created by Guy Howard-Willis in New Zealand. Instead of being cooped up at home or in a sweaty gym, you can take this bike for a ride on the ocean. You can surf waves with it, enjoy a sunrise workout on a lake, and explore new waterways generally restricted to gasoline engines.

“I always thought the bike would be interesting. I thought it would be popular, I had no idea it would be like this. People never imagined that you could ever ride a bike on water like this, ”said founder and developer Guy Howard-Willis.

The exciting invention offers many benefits to those who enjoy cycling. First of all, the hydrofoil bike eliminates the dangers and hassles of cycling on busy roads. You have much more space in the open sea, which allows for a better experience. In addition, the fully electric bike it does not pollute the environment, so you can feel good riding it. The bike fits in the back of most vehicles, offering easy transportation to your favorite location.

“I had this idea in my head of cycling, cycling on water. I really enjoy cycling, I love swimming, so the two go together as far as I’m concerned. But how can you simulate the cycling experience, but on the water? The Hydrofoil Manta5 Bicycle It’s an idea that I had for a long time. “

After Guy got the idea for the hydrofoil bike, he had to scale a big mountain to bring it to market. Most people know how to ride a normal bike: push the pedals, turn a chain, and go. However, replicating that experience on the water would require some improvements. The idea captivated many people, but now came the hard work of transforming thought into reality.

The first step in the process was designing the bike to ensure it remained stable in the water. You pedal to gain momentum on a normal bike and keep your body balanced to avoid tipping over. In the water, however, you would easily fall because the bike would not stay afloat. So to combat this problem, the Hydrofoil Bike has slats at the rear and front, which create stability on the water.

“So, we would install this type of contraption; You couldn’t really call it a bike, but it had blades on the front and back, and the handlebars and the seat, and basically that was it. And the next thing was, could you push yourself? “Guy said.

It took some trial and error, but they eventually created a propeller that worked well. The next step was to find out how a cyclist could get back to the bike if they fall. So the company rented a pool late at night when it was empty to run some tests.

“I was riding my bike in the pool and driving home, like 100km to drive home, my hands were white and it was freezing cold, but it was really an exciting time,” Guy recalled. “The part where it really got exciting was when we applied for a design award and won a gold award for concept. It was on national television, on the news, actually. “

It is always gratifying to see your hard work and groundbreaking ideas gain ground. Hydrofoil Bike went viral and the company started receiving emails from people all over the world. They started receiving thousands of messages about the product. After all, people had never seen a bike that could pedal on water prior to!

While it took immense effort and dedication to create the finished product, Guy would not trade it for the world. He has gifted the world with a new invention that has already brought joy to many people. He is inspired to have developed a product that breathes new life into the cycling industry. Of course, he felt like giving up many times during the process, but little progress along the way kept him on track.

“The most rewarding part of creating this bike is watching people use it. The first 30 bikes we sold were in New Zealand. We just had a customer experience day at Lake Tarawera, and one of the colleagues crossed the lake for an hour to meet up with the group. And seeing these bikes riding on the lake all together, for me personally, it’s really gratifying. “

When they first designed the bike, It only came in a manual model. This worked well for people with a high level of fitness, but was not accessible to the general population. So, to reach more customers, the company decided to equip the hydrofoil bike with an electric motor. Once they did, it opened the market to a wide variety of customers. Guy said 12-year-olds to older adults like him can now ride them.

For now, bikes are purely recreational, but Guy dreams of taking them all the way to the Olympics one day. They are working on developing a manual model capable of competing to make it more competitive. He says to “watch out for that one” in the future. If you want to learn more about these amazing bikes, visit the Manta5 website.

Final thoughts on the new frontier of cycling, the world’s first hydrofoil bike

Guy Howard-Willis combined his love of swimming and cycling into an entirely new sport: hydrofoil. If you are tired of fighting the crowds on the streets, you can take your bike into the water for a more relaxing experience. However, if you are more of a thrill seeker, you can also ride your bike on waves and rough waters! This bike offers something for everyone, which is what makes it so unique. The ingenuity of humans is truly inspiring!