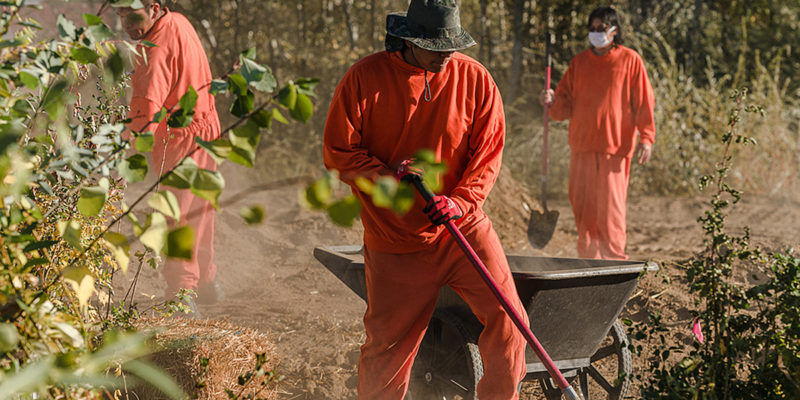 
Ethan Bryson had a vision as he gazed out over the barren landscape of a correctional facility on tribal lands in Washington state. He decided to turn the piece of land at the Yakama Nation Rehabilitation and Correctional Center into a lush, prosperous forest, with inmates at the heart of the project.

Bryson is a “forest maker” for the US conservation organization and the Sugi app, specializing in community forestry. He set out to organize the project and, in March this year, the prisoners began the second phase of planting 5,000 native trees there. Some 36 species will eventually form the ‘healing forest’, including medicinal plants.

“Our identity lies within these plants,” said Marylee Smunitee Jones, a member of the Yakama Nation, who has helped lead the project. “They show us that it is okay to be unique, that we all have our own medicines and that the healing forest is needed, it takes a lot.”

The global community of forest producers in Sugi uses the Miyawaki planting method. It was a pioneer in Japan and consists of planting various species together. According to Sugi founder Elise Van Middelem, native forests are “30 times denser, capture 16 times more carbon, and are 100 times more biodiverse than conventional tree plantations.”

Regarding the impact on the inmates: “I’m going to be able to stop by and show my children that I did that,” said one inmate. “It feels great. It makes my heart feel good.”

A similar tree planting project that was tested in Brazil’s Rio de Janeiro state is said to have reduced levels of violence in the area’s overcrowded prisons.

I’m going to be able to show my kids that I did that. Makes my heart feel good

Meanwhile, the world lost nearly 12 million hectares of tropical forest in 2019, according to monitoring by Global forest watch.

The 1t.org The platform was launched at the annual meeting of the World Economic Forum in Davos in 2020 to encourage and coordinate efforts to plant 1 trillion trees by 2030.