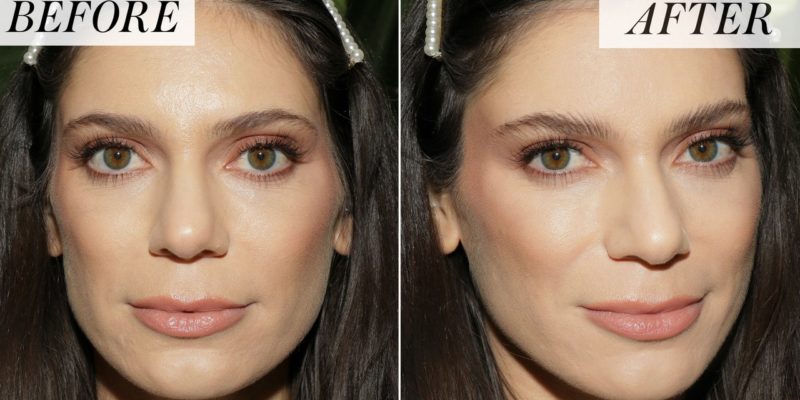 It’s safe to say that I have a thing for bold, natural brows. Between one of my favorite models (Cara Delevingne), my boyfriend (who’s got a pair of above-eye adornments to rival the dreamy Jon Kortajarena), and my pups (two miniature schnauzers with truly unruly brows), I’ve simply surrounded myself with eyebrows that are nothing short of spectacular.

The beauty world concurs: Brows have become a focal part of any makeup look, with the ability to make you look polished, awake, and rejuvenated. “A good brow is the difference between an OK makeup look and a fantastic makeup look,” explains makeup artist Katrina Klein. “They completely shape and change the face and are probably the most important part of makeup for me, after skin.”

But my personal affinity for full brows might have something to do with my own. They’ve definitely got that “fluffy” texture down (shout-out to my dad, who has brows like a wizard), but they’re somewhat sparse — particularly along the tail at the outer edges. When natural brows with softer, unmanicured edges began popping up on the runways, and the blocky “boy brow” with a less dramatic arch became popular circa 2015, I took the opportunity to embrace the style and grow my brows out. For two entire years, I abstained from brow plucking, waxing, or hair removal, aside from the obvious wayward straggler here and there.

At this point, fresh off a year of a tweezer-less quarantine, I took my ungroomed pair of eyebrows — a blank palette, if you will — to Hollywood’s foremost brow artist Kristie Streicher, who is the cofounder of Striiike and creator of a trademarked service and regimen called The Feathered Brow. As Hollywood’s original full-brow advocate, her aesthetic is considered to be in a league of its own, gracing the faces of countless celebrities. “[My signature brow] is feathered, soft, lush, lived-in, and rehabilitates thin, over-tweezed brow trends from the ’70s, ’90s, and early 2000s,” she explains. “The Feathered Brow embraces a natural, fuller shape that is groomed into sophistication.”

The shift to fuller brows

Streicher has been a fierce proponent of what she dubs the “fuller brow movement” ever since 2001, influencing her celebrity clientele and educating their makeup artists on the importance of preserving the integrity of our delicate brow follicles. All this time, she has been discreetly preaching the gospel of the good brow, influencing the beauty world behind the scenes from the top-down, adamant in her belief that, like eyelashes, “The more hair, the better.” Her efforts have absolutely paid off.

How to Write Love | DailyGood