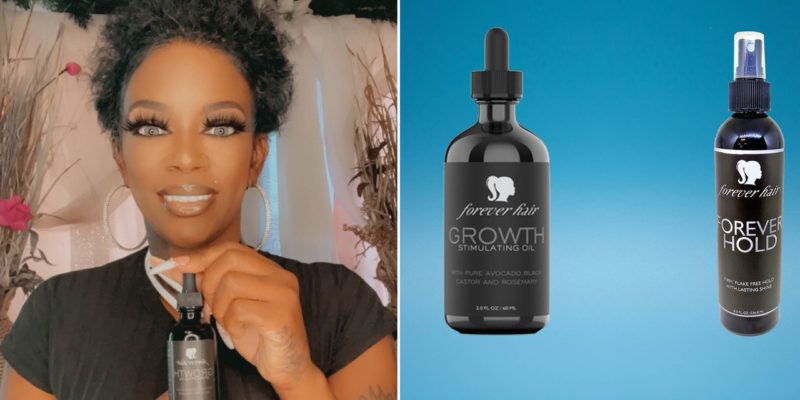 On February 3, 2021, Tessica Brown posted a TikTok video explaining how her hair ended up stuck in a slicked-back, braided ponytail. After running out of her Got2B Glued Blasting Freeze Spray, she grabbed Gorilla Glue spray instead, hoping that it would give her the lasting hold she desired. Unfortunately, that hold lasted for almost a month before she came to the social-media platform to share the experience and warn against ever using the superglue as a styling product.

The video went viral, and Brown became known as “Gorilla Glue Girl.” Folks stayed tuned for updates on the state of her frozen-in-time ponytail. About a week later, on February 11, Brown underwent surgery and some good news was delivered: The glue was finally out. It was comforting for many to see and hear that she could finally run her hands through her hair.

And now, four months later, she’s refusing to let that unfortunate situation be the only thing she’s known for. Instead, she’s using it as an opportunity to start her own hair-care brand called Forever Hair. It officially launched on June 16 with two products: Growth Stimulating Oil ($18) and Forever Hold hairspray ($14).

Rather than starting with a shampoo or even a moisturizing leave-in, Brown opted for a styling option and a scalp product that she felt would best fit her own hair needs at the moment. After her experience with the superglue, she needed a moisturizing oil that would help promote healthy hair and scalp and swears the Growth Stimulating Oil is the one.

At night, she massages a few drops of the oil onto her scalp and loves the tingling sensation it provides. It’s infused with several different oils, like that of avocado, black cumin seed, and safflower. It also has a blend of essential oils like lavender and rosemary, the latter of which has been compared to minoxidil for hair loss in some clinical trials.

Brown is obsessed with her ponytails (it’s a go-to style for her), so she wanted a hairspray that gave her the staying power she wants without damage. “With the spritz, I was able to get [my hair] all up and blow-dry it to make it stay in a ponytail,” she says. The hold is strong, but it’s not Gorilla Glue strong, she explains, so this won’t make your style last past a wash.

OMAD: Everything You Need to Know About Eating One Meal a Day

By stufflovely
9 hours ago
Uncategorized