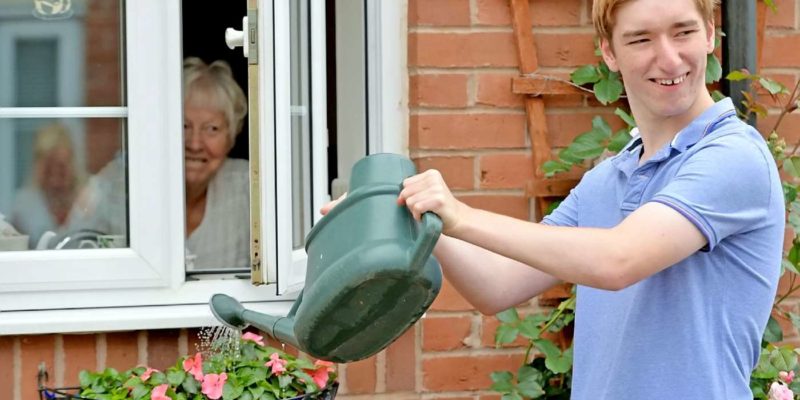 
A disinterested teenager has performed a random act of kindness every day since the start of the pandemic.

18-year-old Sebbie Hall, who has a learning disability, started his kindness marathon after wanting to gift his own iPad to a friend so they could Zoom in early 2020.

His proud mother Ashley asked him to think of skills she could use to raise cash, to which he replied, “I can be nice.”

Since then, the teenager, who also has a rare chromosome abnormality, has performed at least one act of kindness every day – more than 1,600 in all.

British Prime Minister Boris Johnson thanked him for his “wonderful determination”, while actress Joanna Lumley said his kindness “has stolen my heart”.

Sebbie has walked the neighbors’ pets, watered gardens, sent mail to isolate locals, washed cars and even a boat, and baked cakes for the nurses.

He handed out PPE, collected unwanted Halloween pumpkins and turned them into soup and cakes for people in need, and gave warm coats to the homeless.

The teenager also gave lottery tickets bought with his pocket money to strangers, gave 100 roses to 100 women to make them smile and helped at food banks.

Money pledged by people inspired by their kindness has enabled 300 families to obtain adapted computing devices and financed a rugby team for the disabled.

She paid for three sets of information technologies for young people to use to find work, bought a communication kit for children in four specialized schools, and established an arts center for the disabled.

The teenager, who was told he would never walk or talk, has defied those expectations and his own nervousness about talking to strangers.

Sebbie, from Lichfield, Staffordshire, put it simply: “Kindness is my superpower. I don’t stop. I want to raise more money and make people happier. “

Mom Ashley added, “It’s hard for any young man to approach random strangers and talk to them, and even harder for Sebbie because he finds it so hard to find the words on his own.”

But somehow he found this inner strength to be kind.

“It has given him a position within his own community and a confidence that he did not have before.

Other sweet gestures this disinterested teen has made? He handed out 365 donated Easter eggs to random houses dressed as a bunny, and left secret bags made up of Santa Claus at 80 doors last December. The school student has written poems for friends and delivered toiletries to the women’s shelter.

Now he is raising money to install physical therapy rooms by running two miles every day. Three cheers to Sebbie, who is an inspiration to many.

SHARE the generosity: send this uplifting story to your friends on social media …