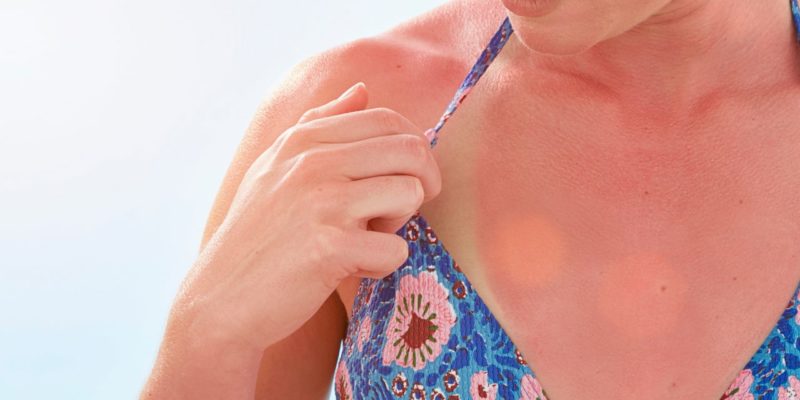 By now, we’re all (hopefully) aware of the dangers of a bad sunburn — forgetting your sunscreen can lead to redness and blisters, cellular damage that causes early signs of aging, and of course, a heightened risk of skin cancer. It can also lead to sun poisoning.

But what exactly is sun poisoning? You’ve probably heard the term thrown around a lot (especially during the summer months), and even the experts themselves aren’t entirely on the same page. “There really isn’t an entity called sun poisoning  — dermatologists simply don’t use this term because it is not a real entity,” says New York-based board-certified dermatologist Shari Marchbein. “‘Sun poisoning,’ is just referring to a severe sunburn, which can often be accompanied by systemic symptoms like chills.”

But while “sun poisoning” may be a casual, unofficial term — one we’ll use in this article for the sake of differentiating it from a sunburn that stops at the usual redness and skin damage — there’s nothing casual about the symptoms you may experience after an especially bad bout of sun exposure. We spoke to dermatologists to find out how to identify it and how to treat it.

What is sun poisoning?

“Sun poisoning is a reaction to a severe sunburn that affects your entire body,” Joshua Zeichner, director of cosmetic and clinical dermatology at Mount Sinai Hospital and a board-certified dermatologist in New York City, tells Allure. Essentially, a case of sun poisoning feels like the flu — in addition to dealing with a painful burn, you might have a fever, chills, nausea, vomiting, exhaustion, and even fainting spells.

“Symptoms last anywhere from a few hours in mild cases to days in more severe cases,” Julie Karen, a board-certified dermatologist in New York City and spokesperson for the makers of Banana Boat, tells Allure.

The culprit behind the total body reaction is inflammation, explains Zeichner. When you get burned, your scorched skin becomes inflamed (that’s what causes the redness and tenderness). But burns, particularly bad ones, also cause systemic inflammation throughout your body, he says. In other words, the effects of a sunburn go beyond skin-deep.

Before you experience the more serious aforementioned symptoms like a fever or vomiting, your first sign of sun poisoning may be what looks like your worst sunburn ever — because it’s actually a rash. “The sun rash can be wide-spread or may appear only on areas of the body that were most severely burned,” says Connecticut-based board-certified dermatologist Deanne Mraz Robinson. Unlike the typical discomfort and redness, the look and feel are different, she explains. “The rash is typically itchy and can develop small bumps that look like hives.”

Jordan Syatt on the Good, Bad, and Ugly of Body Positivity