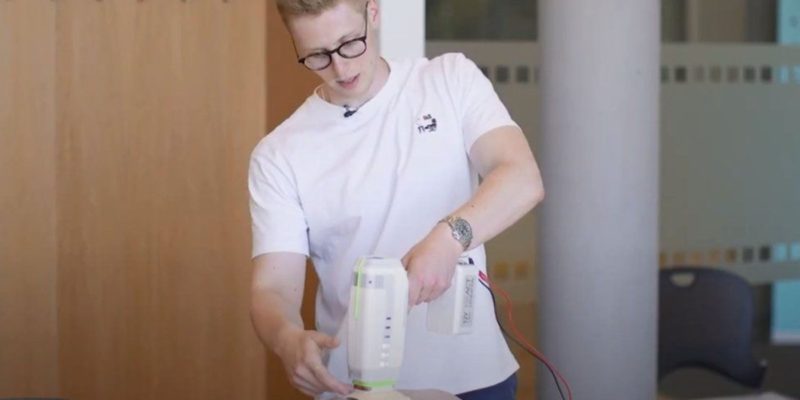 
A UK university senior is doing his part to ‘stop the bleeding’ of violent knife crime by inventing a device that can help first responders better seal wounds.

Depending on the location, a stabbing victim doesn’t have long without proper first aid to stop blood loss, but if Joseph Bentley’s new invention is on the scene, it could significantly reduce that possibility.

The device is known as the emergency actuated rapid tamponade, or REACT, and it borrows the long-used, but hardly perfect, gauze function to apply pressure to the wound site to stop blood loss. Once the blood clots stop bleeding, removing or altering the gauze can reopen both the wound and the problem.

Rather, REACT inflates a silicone balloon-like sleeve known as a tamponade, which applies similar pressure and allows blood to clot. Once the balloon needs to be removed, it is slowly and gently deflated, allowing the clots to remain intact.

MORE: Accidental discovery of a new T cell hailed as a breakthrough for ‘universal’ cancer therapy

First responders would insert the sleeve into an open wound and use the actuator device, which looks a bit like a cordless hand drill, to first select where the wound is on the body and then inflate the tamponade through a valve in exactly the correct proportions for the location.

“I know several friends who have been the unfortunate victims of knife crime, fortunately none of the incidents were fatal,” Joseph explained to the Loughborough University press.

“The tamponade can be in place and stop bleeding in less than a minute, saving hundreds of lives a year, and because the tamponade is suitable for large cavities such as the abdomen, it is also easier and faster to remove than current methods. used to stop bleeding, giving the patient the best opportunity in reconstructive surgery ”, he added.

Currently seeking a patent for its technology, Bentley’s REACT is still a prototypebut you are hopeful that it can go through the necessary steps to ensure that first responders have access to it as soon as possible.

CHECK: Simple treatment for type 2 diabetes with a low-calorie diet is so effective that it reverses the disease in studies

“The development of medical devices is time consuming, but it is hoped that in a few years the REACT system will be used to control bleeding in knife crime victims and save lives,” Bentley said in a statement. “I hope that one day all the emergency services will take it: the police, the ambulance personnel, even the army, but the absolute goal is to put this product to use as soon as possible.”

(LOOK the video about REACT below).

REPAIR the news of your friends with good news: SHARE this story …

Responsible drinking, but not as we know it: how to sip sustainably this summer