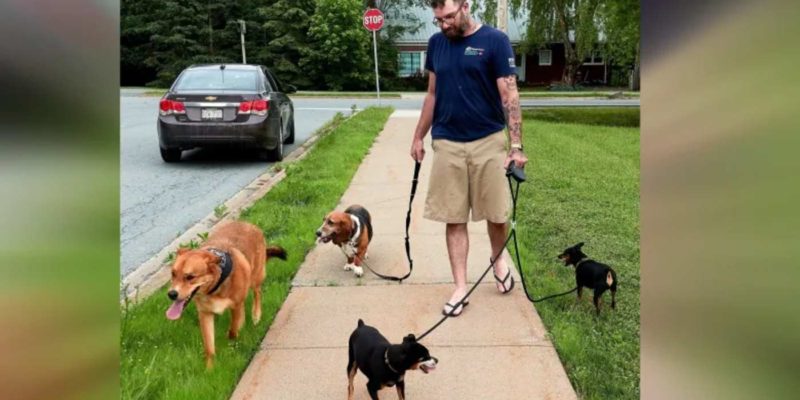 
The universe offers a myriad of opportunities for random acts of kindness. When such an opportunity gets in our way, some choose to ignore it and keep walking, while others rise to the occasion with grace and kindness.

Case in point: When Nova Scotia native Matthew Van De Riet unexpectedly found himself at the scene of a car accident on a lonely stretch of highway, he without hesitation stepped in to help.

Van De Riet was first alerted to the situation when he noticed a very distressed-looking dog standing on the side of the road. Kipper, a 10-year-old Basset Hound, and his canine companion Merlin, a 2-year-old shepherd, were thrown from their owners’ vehicle by the impact of the accident.

After quickly securing the dogs, Van De Riet turned his attention to the human passengers in the badly damaged vehicle. Although the car rolled onto the roof, both the driver and his girlfriend survived the accident.

As Van De Riet attended them with his first aid kit, he approached another passerby to call for emergency intervention. Medical personnel who arrived shortly after determined that the passenger’s injuries, although not life-threatening, justified her being flown to a nearby hospital for care.

Instead of stranding the driver and the dogs, Van De Riet transferred the couple’s belongings and all their dog gear to his truck and drove the young man to the Halifax hospital where his girlfriend was being treated.

But for Van De Riet, the random acts of kindness of the day were far from over.

With his new owners in the area and no family nearby, Van De Riet was left with the logistical problem of what to do with Kipper and Merlin. Once again, without hesitation, he offered to stay with the dogs until the couple could pick them up.

“I thought the least I could do was take those dogs home with me,” he said. CBC News. “I knew the puppies were in shock, and I know that if someone was in an accident and their loved one is hurt, the last thing they need to worry about is their dogs.”

MORE: Man gives his terminally ill dog one last ride up his beloved mountain in a wheelbarrow (PHOTOS)

Although both dogs appeared to be mostly fine, just to be safe, Van De Riet took them to a local animal hospital for evaluation. After a checkup (donated free of charge due to circumstances), the dog duo were cleared to go and given pain relievers to cope with the lingering effects of the accident.

After the vet visit, Van De Riet brought Merlin and Kipper home and allowed them to meet their two Miniature Dobermans housemates. A long day filled with unforeseen events and random acts of kindness was followed by a quiet night of trust, safety, and protection, and all thanks to the unsolicited help of a truly humble local hero.

Any argument to the contrary aside, Van De Riet sees nothing particularly out of the ordinary in his disposition not only to help a couple of strangers in distress, but to go the extra mile to ensure his furry friends are there too. except.

“It was the least I could do. I would hope that anyone in this province would do the same if they were in my place, “Van De Riet told CBC. “It just turned out that I was the first to arrive, I guess. [I’m no] Good Samaritan … It’s just Nova Scotia style. “

While we can only hope that everyone in Nova Scotia shares this selfless outlook on life, we would certainly like to send a heartfelt thank you to Mr. Van De Riet’s parents for raising such a considerate and compassionate son.

Share this PAWsome story with friends on social media …

3 Subtle Signs Of Self-Deception (And How To Stop It)