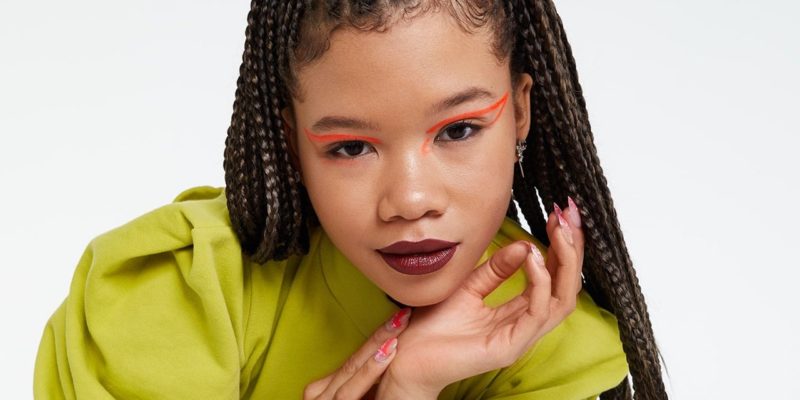 Being in the cast of Euphoria among characters with imaginative makeup while having a more low-key, teen look, Reid admits she was a little jealous. Luckily, her character, Gia, is poised to have her own vibe in seasons to come. While watching season one, you might not have noticed that Gia’s nails were her special way of exploring beauty and self-expression. “We made sure she changed her nail looks. I had like nails like this,” Reid says before holding up her hands to the camera on Zoom, showing off long, sparkly acrylics decorated with smiley faces, clouds, and flowers. “It’s just those small, minute details that make your character who they are.” Reid hints that’s only the start of what Euphoria‘s team has planned for the future of Gia.

Gia’s love of nail art plays off of Reid’s own interest in it. She’s constantly looking for new inspiration on her Instagram Explore page and TikTok to bring to her nail artist. (She even saw Maybelline New York’s Sky High Mascara all over the latter and went to buy it at CVS that night, only to find it sold out.) When she was younger, Reid reveals she not-so-patiently counted down the days until she could finally get acrylics. “I used to beg my mom for them, and she’d be like, ‘No, you’re too little,'” Reid recalls. “For my 13th birthday, I was able to get short, tiny acrylics. Then, they’ve evolved into ideas like [the nail art I have now], but I would never dare to go longer than this because I just don’t think I’d be able to operate.” Her tips are a good inch long right now, so I completely understand that decision.

Also at 17, Reid has learned to not be defeated by her skin every time it breaks out, especially since she has temperamental, sensitive skin. “Breakouts can be hard because nobody wants a breakout. But I have learned to embrace it and deal with it,” she says. “I know, as a teenager, we break out, and there’s nothing we can really do about it. So I’m learning to love my breakouts.”

This Editor-Favorite Cleansing Device Is on Major Sale Today