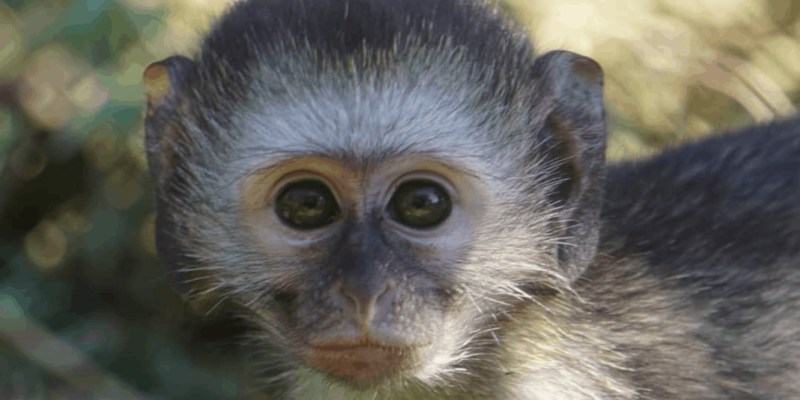 While vervet monkeys have not been classified as endangered, they have gradually started to disappear due to human activities. Found in eastern and southern Africa, these monkeys tend to live in areas up to 4,000 meters in elevation. However, humans living close to civilization have been viewed as pests by humans, unfortunately.

To save some of these beautiful creatures, the Mono Vervet Foundation provides a sanctuary for orphaned and injured primates.

Dave Du Toit founded the nonprofit in 1993 after discovering an orphaned baby monkey and asking authorities what to do with it. Unfortunately, they had been euthanizing the monkeys because the public viewed them as pests and there were no facilities to care for them. Since Dave loved nature and the outdoors, he decided to open a sanctuary so that the vervet monkeys could live in peace.

“From that day on, it was a great struggle trying to save these animals and make sure they had a place to go and give them a second chance to live in freedom in the bush,” Dave said.

Up to this point, the sanctuary has provided homes for more than 500 orphaned, injured, abused and abandoned primates. Located in Tzaneen in the Limpopo province of South Africa, the organization also provides volunteers with opportunities to learn and work with the monkeys. Many people come from all over the world to help rehabilitate and care for vervet monkeys. No prior experience is required, but you must be 18 years or older and commit to at least 4 weeks of service.

“Our main goal for our organization is basically trying to make people much more aware of wildlife and that every animal has a place on Earth and the right to live on Earth,” Dave said.

While it takes a lot of time, effort and resources to keep the base up and running, watching the monkeys thrive makes it all worth it.

Provide a high quality of life to these creatures.

“No matter how tough and harsh our days are and how we fight, at the end of the day, just seeing these little ones be happy in their own way and being back with other monkeys playing in the trees, that’s amazing. “

VMF designed a unique rehabilitation program over the years that helps reintroduce and re-acclimatize monkeys to the wild. They use large enclosures that help the monkeys naturally raise troops or families in preparation for their release into the wild. Orphaned vervet monkeys can easily assimilate into this system and return to the wild in as little as 4-8 weeks. The VMF introduces the babies to the women already living in the sanctuary to help them return to a natural way of life.

Dave loves being able to see the monkeys thrive again after having emerged from sometimes tragic circumstances. Some monkeys have been abused, abandoned, or even used in laboratory experiments. When they first enter the program, many of them are scared, traumatized and heartbroken at losing their families. However, when the team begins to work with them slowly, they begin to feel comfortable in their new surroundings and quickly make friends.

Vervets are shy monkeys at first.

Once they warm up to their new surroundings, they begin to blend into the troops and really live as they should. Vervet monkeys enjoy climbing trees, playing with other monkeys, and simply living in their natural environment.

“I think the rewards of taking something that has been displaced and putting it back is really amazing,” said Dave. He believes that we must all do our part to protect the Earth and make it a safe and prosperous place for all species.

“Please take care of what we have. It is disappearing at such speed, and believe me, it is worth fighting for. It is worth protecting it and making sure that there are always spaces where you can go out and enjoy nature, and have natural areas ”.

Not only monkeys, but all animals, including humans, need natural spaces to enjoy. Without nature, no species could exist on Earth, which is why Dave says that “it is very, very important to protect it.”

Here are some facts about vervet monkeys, so you can get to know them better:

Currently, the Vervet Monkey Foundation is working to buy land in South Africa to release rehabilitated monkeys. The land would be a protected forest for monkeys, avoiding conflict with humans. The VMF would also maintain the 300-500 hectares of indigenous plant and animal life, helping to cultivate a thriving ecosystem. Additionally, this would create dozens of jobs and new opportunities for volunteers.

The foundation is working to raise enough money to buy the land and pay for construction. If you want to donate or volunteer, you can visit their website for more information.