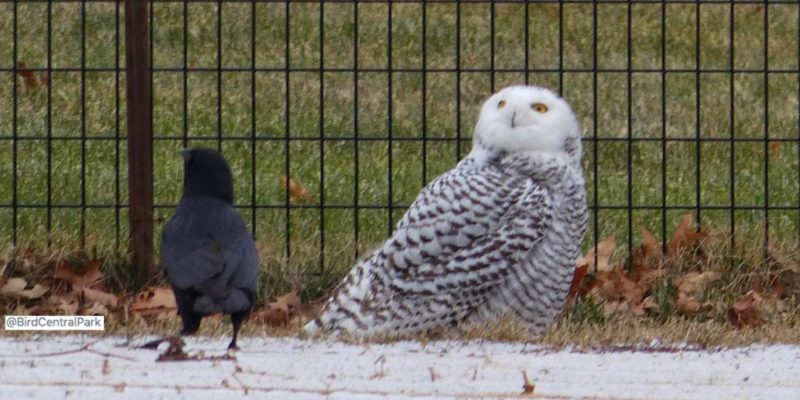 
New Yorkers received a once-in-a-lifetime visit from a snowy owl, a species that hadn’t been seen in Central Park in over a century.

The white raptor was not as well camouflaged as in its home in the Arctic, which is its normal summer home. The species migrates south in search of food in the winter, but no one expected to see the bright white feathers on a baseball field with the Manhattan skyline in the background.

David Barrett, who runs a popular Twitter page, Manhattan Bird Alert, was the first to report the sighting, calling it “perhaps the first documented record of this species in the park.”

His tweet on January 27 alerted a crowd of bird watchers who stayed behind a fence to give the majestic predator plenty of room.

“Yesterday’s snow and cold in our north probably encouraged this snowy owl to fly south in search of better hunting conditions,” says Barrett.

“These owls like flat land and beaches, so the flat, sandy Central Park North Meadow might have attracted them.”

Snowy Owl was the center of attention today in Central Park and was ready to play ball .. ⚾️ Thanks @BirdsCentralPark for alerts. #birdcp #Wednesday #birding Thank you very much@gigi_nycfor sending me a message and@VenusNabs pic.twitter.com/p42QG7ve1d

The appearance is not due to the pandemic, as some would assume. Snowy owls have been seen on Governors Island in New York Harbor near Brooklyn for the past decade.

However, with more people strolling leisurely during the confinements, more birds are being reported than ever in wildlife apps and on social media.

LOOK: Miracle on 34th Street for a Little Owl Found Kept in the Rockefeller Christmas Tree

No sightings of Snowy Owl have been reported in the park for the past 2 days. Maybe he’s checking out the nearby island, but with snow in the forecast, he could be back.

FLY this beautiful sighting to your flock on social media …

15 Phrases to Affirm Your Belief in Your Own Strength

This New Year, Dare to Be Unfaithful to Your Goals