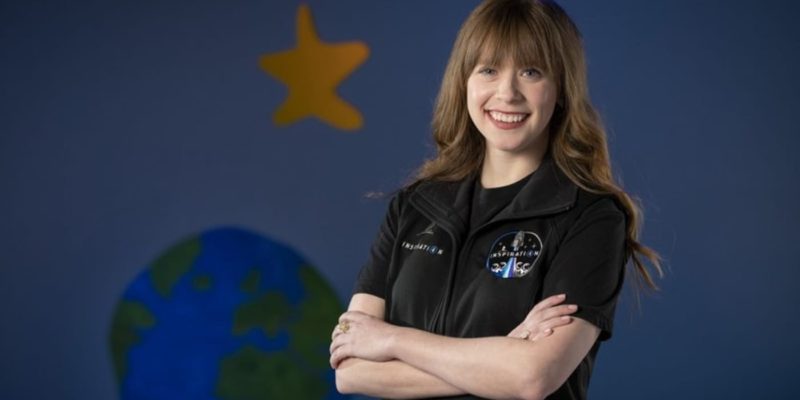 
The stars seem to be continually aligned for Hayley Arceneaux, who after a battle with bone cancer when she was 10, grew up to become a medical assistant in childhood oncology at St. Jude Children’s Hospital, the same center where she was treated.

As if that wasn’t reason enough to thank her lucky stars, Arceneaux, now 29, was selected by St. Jude staff from hundreds of other employees to represent the famous hospital on the first civilian space flight. , hosted by SpaceX. , which will take place at the end of 2021.

Inspiration4 is a private multi-day research and sightseeing trip to low Earth orbit that was purchased by Jared Isaacman, CEO of payment processing company Shift4Payments, as a massive fundraiser for St. Jude’s.

In the Dragon Capsule there will be four seats available, symbolically representing four pillars, of which Arceneaux will be the pillar of hope, for obvious reasons. The other two seats have yet to be assigned, but one will go to a sweepstakes contestant who donated a certain amount to St. Jude’s, and the other to a random business owner who uses Isaacman’s payment service.

“My battle with cancer really prepared me for space travel,” Arceneaux said in an interview with The Associated Press. “It made me hard, and I also think it really taught me to expect the unexpected and move on.”

Arceneaux hopes to show St. Jude children that “the sky is no longer the limit,” and tells the AP that “it’s going to mean a lot to these kids to see a survivor in space.”

The team, when finally assembled, will receive rigorous training in everything necessary to operate in the unique conditions of space, as well as aspects of the SpaceX Dragon capsule.

A series of novelties

She will also be the first American astronaut with a prosthesis. During the battle with bone cancer, he required surgery on his knee. Now his femur contains a titanium rod, and he still has episodes of pain there from time to time.

Inspiration4 is also the first fully civilian space flight, as well as the first privately chartered space flight. Isaacman announced the mission on February 1, saying that he expected to raise $ 200 million for St. Jude’s, $ 100 million of that from his own fortune.

PLUS: A scientist’s dream was to visit the Moon; after his death he finally made it there

“As I spent time with Hayley in the early days of mission preparation, she is everything we want our team to represent: She is interested in the world around her, dedicated to caring for others, and hoping for a better future for all of us. “Isaacman said in a statement. “She already inspires me, and I’m sure she will inspire many others as they meet her in the course of our mission.”

Several reports claim that Arceneaux, a native of Memphis, Tennessee and a great space exploration enthusiast, was at home when she received the “unexpected” call from St. Jude’s.

NPR details that he first passed the idea on to his mother, as well as his brother and sister-in-law, who are aerospace engineers. They assured him how safe space flight was.

RELATED: Iconic astronauts Neil Armstrong and Buzz Aldrin have teamed up in the history books … for a chicken nugget

“It is an incredible honor to join the Inspiration4 team,” said Arceneaux. “This seat represents the hope that St. Jude gave me and continues to give to families around the world who, like me, find hope when they walk through the doors of St. Jude. “

SHOOT for the Stars – Share this inspiring story with your friends …

10 Habits That Lead to Healthy Decision-Making