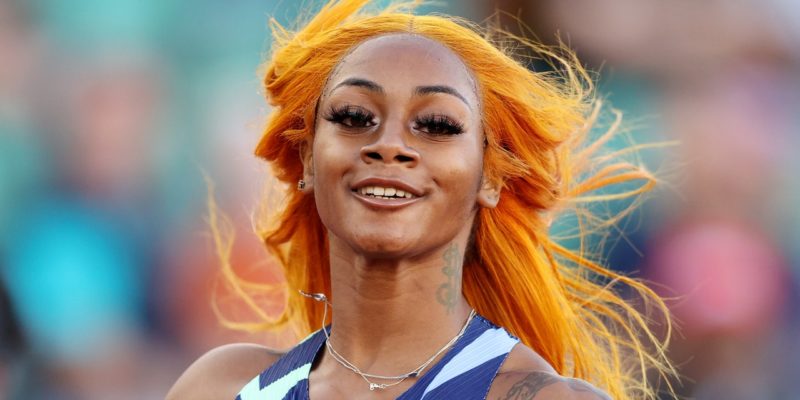 We’re still not over the way Sha’Carri Richardson sprinted into our hearts and onto our hair-goals list a couple of months ago. (We’re also still not over the utter B.S. that kept her out of the Olympics after triumphantly qualifying, but I digress.) The gifted runner became instantly recognizable for the stunning orange wig she wore to race, and while she’s been seen in darker, redder variations of the shade since, it seemed warm, fiery hair was Richardson’s go-to hue — until now.

Richardson posted a video to Instagram revealing an unexpected new look. The clip starts out with the star athlete sitting in a salon chair, showing off her natural hair. As she lip syncs to Nicki Minaj’s voice — “I took a couple, you know, I took some time off to rest, and now it’s game time, bitches” — her stylist yanks her smock off, cutting to her “after.”

Richardson now has super long, platinum blonde, middle-parted, wavy hair — a huge departure from her usual color. But what makes it an even bigger change is the incredible section of blue underneath. The look was created by Orlando-based stylist Brianna Renee, also known as The Lace Tamer.

Peekaboo color like Richardson’s new blue is a huge trend for fall, according to New York City-based stylist Luis Miller. “Peekaboo colors I’m seeing a lot of — some in half the bang, and then under the side, around the face,” he tells Allure.

Missouri colorist Colissa Nole has observed the same thing — and not just on blonde hair like Richardson’s new base color. “High-contrast and pops of bright next to a dark base is super in as well,” she says.

We’re obsessed with how the blue matches her Nike singlet and briefs. (If you look closely, it appears to match the accent nail on her fabulous manicure, too.) And we honestly can’t wait to see this beautiful hair flowing behind her when she gets back on the track.

After Collecting Over 8000 Titles, Woman Fulfills Dream of Opening a Bookstore While Recovering From Scary Diagnosis