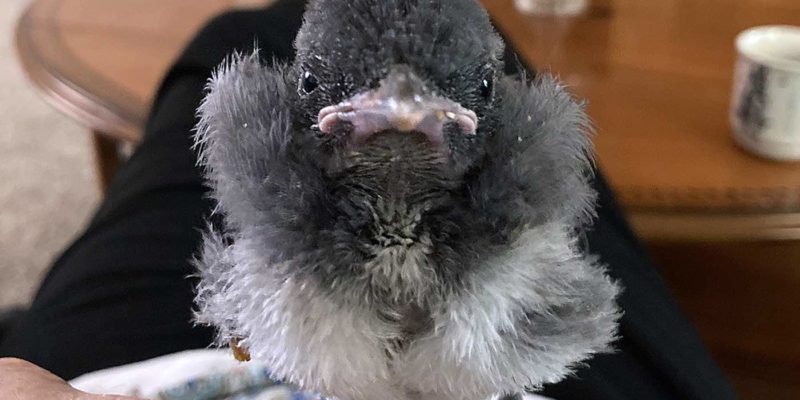 
[By USACE]– Temperatures spiked 100 degrees in East Sacramento on July 9. Still, U.S. Army Corps of Engineers construction contractors and workers in the Sacramento district made steady progress on the Sacramento River East Levee project, until a contractor noticed something out of place. .

Amid the bustle of the activity, contract worker Roberto Navarez saw two gray birds sitting on the levee, right in the path of a huge bulldozer moving up a mound of dirt. He noticed several long branches of a huge oak that spanned the dike, but could not see a nest anywhere in the tree.

Assuming the chicks had fallen or jumped out of their nest, Navarez continued to observe the pair, hoping that they would soon be detained by their parents. Unfortunately, neither the mother nor the father showed up.

With construction crews rumbling by and the midday heat now surpassing 104 degrees, Navarez knew the chicks needed to move out of harm’s way and fast. Feeling apprehensive about moving them himself, he approached wildlife biologist Pete Morris of Nordic, the contractor for the SREL Contract 2 project.

Upon arriving at the scene, Morris observed the birds and decided to pull the chick pair out of the scorching heat if they were to have any chance of survival. He then retrieved a small cardboard box, and the two rebellious chicks were carefully picked up and taken back to the US Army Corps of Engineering (USACE) trailer.

Once inside the air-conditioned building, the larger of the two chicks immediately managed to get out of the box and began to jump, interact with rescuers and “screech its lungs.” The younger brother, however, seemed to be struggling. He was quiet and listless, huddled in the makeshift nest.

Not knowing what to do next, someone mentioned Lee Roork’s name. Working on the levee as a Quality Assurance Representative for USACE, Roork was known to be an avid bird watcher. He could often be seen on his breaks or at lunchtime looking at birds and nests with his binoculars. Roork was also known to bring injured owls or hawks to various wildlife sanctuaries around Sacramento in the past, so he seemed like the right person to contact.

The ideal solution, Roork knew, was to return the stray chicks to the tree from which they had fallen in the hope that one of the parents would return to collect them. He crushed some blackberries and seeds, providing some food for obviously hungry babies, then he put the box and birds back on the tree. But as soon as the cardboard “nest” was attached to a branch, the larger of the two chicks jumped out of the box. An adult jay immediately pounced and began interacting with the chick as they both ran hurriedly into the nearby undergrowth.

When Roork returned to work, the smallest and weakest bird remained in the nest, but Roork wanted to give the parents time to come back and take care of their baby. He said he did intermittent checks throughout the rest of the day, but found that neither parent would go anywhere near the “nest” that contained the abandoned baby Jay.

By the end of the work day, it looked pretty gloomy for the lone pigeon, Roork said.

“I was sure that the little bird would not survive another 24 hours unless someone helped him. He was in very bad shape, so I decided to try to help him, rather than let him die, ”said Roork.

He then sent a one-sentence text message to his wife, Susan Roork (also a USACE employee, who worked remotely from her home, not far from the SREL site). “Do you want to raise a baby scrub jay?” the text read.

Susan, an animal enthusiast who is also very experienced in rescuing, sent a one-word reply … “Definitely!”

Susan went into investigative mode, scouring bird rescue sites for pertinent information and found that bush jays eat everything from soft cat food and mealworms to local berries, fruits and seeds. What they never found out was whether “Blu Blu” (the name that stuck) was a man or a woman.

“Their colors and markings look remarkably similar,” Susan said. “So we just hung out with ‘her’ most of the time.”

However, a more important question remained: Would Blu even come out ahead? For the first 24 hours, Blu barely moved. She sat limp, curled up in her newly created home nest. But on the second day, Susan was able to get him some food and water.

The transformation was incredible.

SIGHT: Firefighters get creative to help a baby raccoon with its head stuck in a sewer

“She began to interact wholeheartedly with us, enthusiastically sipping water through a small hypodermic dispenser, gobbling up healthy portions of food, acting alert, receptive and curious – she was making her way,” said Susan.

From that point on, Blu’s future never seemed to be in doubt. He continued to get stronger, increasing his appetite and growing faster than Susan and Lee thought possible.

“We were absolutely amazed at how fast it grew,” said Susan. “We would go to bed and when we checked it the next day it was like looking at a new bird: feathers would appear where there were none before, its tail feathers were an inch longer, its feet and small claws grew rapidly. “

RELATED: Clever Cockatoos Craft 3-piece tool set to extract fruit, becoming the only fourth animal species to do so

From the beginning, Susan, Lee, and their teenage daughter, Jillian, approached taking care of Blu with one ultimate goal in mind: to return her to nature. To do so, they tried to push Blu into doing things he would have to do in the wild, like finding his food, cracking nuts, catching flies, and developing his flying skills. But they also discovered that Blu had many of these traits ingrained in his DNA, and he quickly began taking food and hiding it in various places within the house to eat later.

“Our biggest concern was whether Blu could learn all the things he would need to survive in the real world,” said Susan. “We felt it was important to make sure she had challenges and tasks to solve, as she would when we released her, so she regularly came up with problems for me to solve. We were always amazed at how quickly he discovered each one and mastered the skills involved.

In the first few weeks, little Blue was literally Susan’s favorite project. While Lee worked on the levee and Jillian attended school, Blu was telecommuting with Susan, pecking at the keyboard to help her type, jumping and creating mischief, along with the occasional typo, pulling her earrings, fluttering, stealing sticky. .. notes … only to suddenly snuggle into a fluff ball, fall asleep on your wrist, or snuggle warmly against your neck.

“Blu had become a great companion and I knew I would miss her terribly when we let her go,” said Susan. “But even though we had all become very attached to Blu and loved the experience of raising her, the ultimate plan to free her was not in doubt.”

With two months of caring for Roork, Blu’s transition was amazing. By the end of August, she had fully transitioned from a girl on the brink of death to a strong and intelligent bush jay ready for the great outdoors. Blu had achieved the status of an expert aerial acrobat, roaming the house regularly, finding hidden peanuts, catching flies in midair, messily bathing in a blue frisbee, and generally acting like a grown bird. And I was spending more and more time looking out the window … 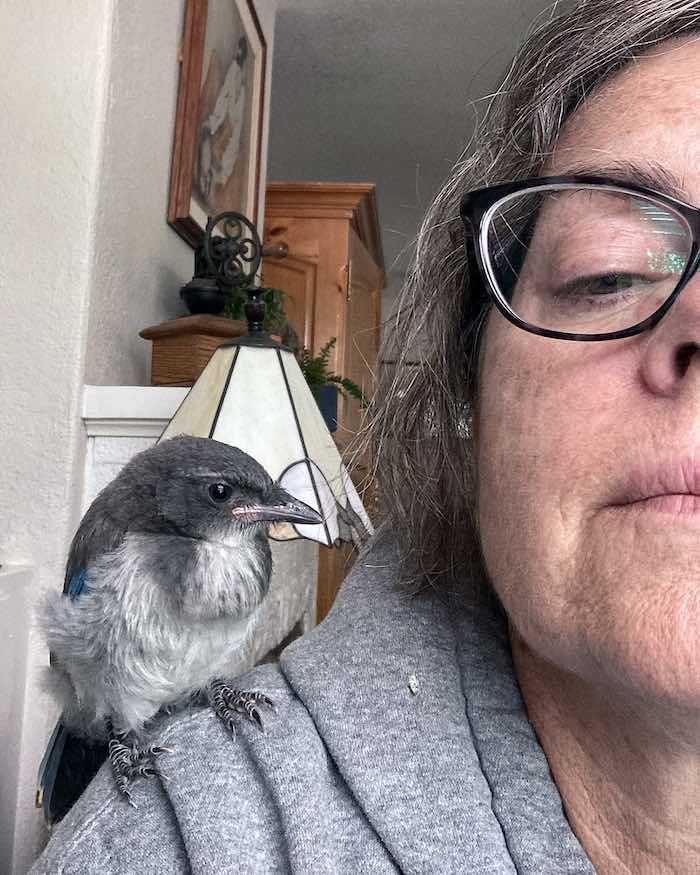 Recognizing Blu’s progress, Susan and Lee decided that Blu’s release date to the wild would be during the Labor Day holiday. And even knowing from the start that they would give Blu his freedom to fly, they both admitted that they were completely in love with the feisty, feathered creature.

“For a brief moment, we thought about turning our large chicken coop into a bird sanctuary for her… but we knew it wouldn’t be fair,” Susan said. Lee quickly agreed.

They planned to bring Blu’s cage-sized sanctuary into the backyard, sit with her for a while, let her acclimate to being outside, and when they could finally swallow their doubts (and their hearts), they would open the door and see. . if Blu was ready for the big blue sky.

Then, as unexpectedly as the little bird had entered their lives, Blu left. During a neighbor’s visit, Blu made the decision for everyone involved and darted through the slightly open front door into the nearby trees. She squawked and complained to Susan for a few moments, but continued to move from tree to tree, farther and farther from the house. Finally, Susan saw Blu join other jays and start flying with them.

“Although the plan was always to free her, we were both heartbroken. But just because we were disappointed we couldn’t officially say goodbye, ”said Susan.

Still, despite the way it ended, both Susan and Lee said it was a wonderful, once-in-a-lifetime experience.

“This has been a unique experience to say the least,” Lee said. “I would never have brought this little bird home unless I really believed I would not make it. He had no idea how demanding these little ones could be or how much attention they needed. But I do believe that we have done everything possible to help her survive in the wild. “

Offering a bit of closure, Blu returned to some trees next to Roork’s house shortly after his departure. Susan said they had a final “conversation” as Blu hopped from branch to branch, yelling with enthusiasm and following them as they walked down the street.