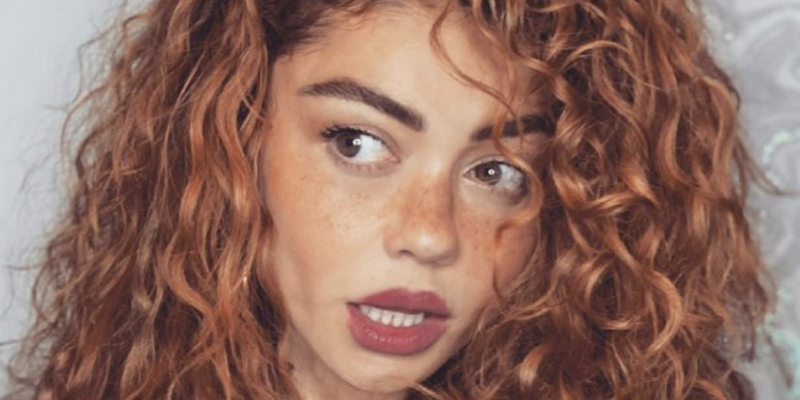 Sarah Hyland has been sporting an absolutely gorgeous shade of red hair since February, but even though we’ve been seeing it in Instagram photos for months, the beautiful color never fails to stop us in our tracks as we’re scrolling through our feed. But we did a legit double-take when the actor shared a stunning new photo that showed off not only her color, but also her phenomenal natural curls and several new inches of length.

On Thursday, June 17, Hyland shared a photo to her Instagram grid in which her fiery red hair is styled with voluminous curliness — a natural texture, as established when she previously pushed back against people who said she’d gotten a perm — and ends that hit just below the ribs. And if you think she looks like the star of Disney’s Brave, you’re not alone.

“Ok. Stay with me. Merida dressed up as Tarzan,” she wrote in the caption for the photo, which also shows off a smattering of adorable freckles across her nose and cheeks.

Nikki Lee at Nine Zero One salon is credited for the brilliant color, which was matched perfectly — in texture, too — by Violet Teriti of Chaviv Hair, a favorite extension expert among celebrities. In addition to Hyland, Chaviv Hair has done extensions for Kylie Jenner, Megan Fox, Vanessa Hudgens, Jennifer Lopez, and many more.

“I used Russian virgin curly extensions using microbeaded individuals, which is a non-damaging technique using no heat or glue,” Teriti tells Allure. “It can stay in her hair for up to three months, she can wear her hair up easily, she can wash and leave it air-dried and it will curl exactly as the hair is naturally.” Teriti says it can also be styled however she wishes, including straightened, and it will still go back to being curly after washing.

Friends and fans are pouring on the love for Hyland’s in the comments, with a few people accurately calling out its resemblance to Julia Roberts’s hair in Pretty Woman. It’s not known if the extensions are for a role or just for fun, but either way, it’s a look we hope lasts.