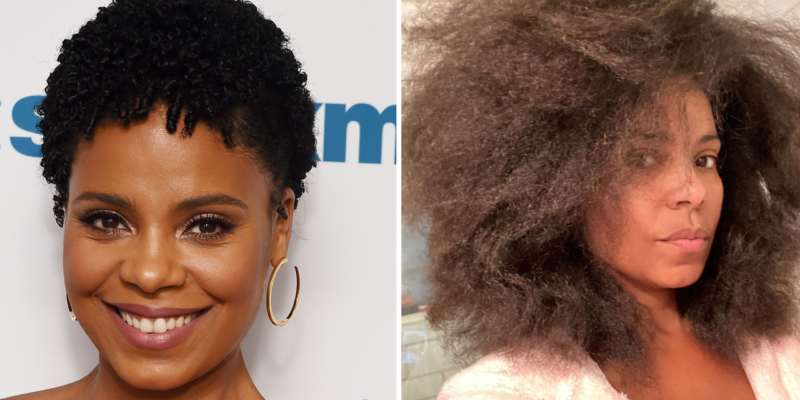 When I saw Netflix’s Nappily Ever After for the first time at a public screening, the entire room went dead silent and leaned all the way forward the moment protagonist Violet took electric clippers directly to her head. No one dared to speak as they watched her shave away the entirety of her hair in a relatable mix of astounded cries and laughter. Part of the reason that scene (and the movie as a whole) had such an impact is because it was the result of actor Sanaa Lathan shaving her real hair and experiencing the freedom of baldness in time with her character.

Lathan’s been growing her hair back out ever since shooting the film — for three years, to be exact — and shared the results on Instagram on December 3. “Good morning. 3 years after shaving it off. Protective styles, braids and almost no heat,” the actor wrote in the caption of her post, a slideshow of three selfies showing herself in a pink bathroom robe with kinky curls flowing all way down to her shoulders.

Naturally, fans are applauding this impressive feat of hair growth. “That hair grew back quickly,” one commenter writes alongside a heart-eyed emoji. “Hair goals. Seriously crushing right now,” says another. Another raves, “That’s gorgeous..I love our hair and heritage.”

And the round of applause is well-deserved because, as I know from personal experience, growing out hair that’s been shaved is way harder than most people could ever imagine. It might look like a whole lot of sitting around and just willing your hair to grow, but then you’ve also got to put up with the constant itchiness, wildly uneven lengths, and don’t’ even get me started on the difficulties of hairstyling during those awkward “in-between” phases. Lathan made it all look seamless, as it’s clear to see her grow-out journey is going spectacularly for her.

How to Make Your Own Deep Conditioner

Chill Out Watching These Reindeer Contemplating the Northern Lights…