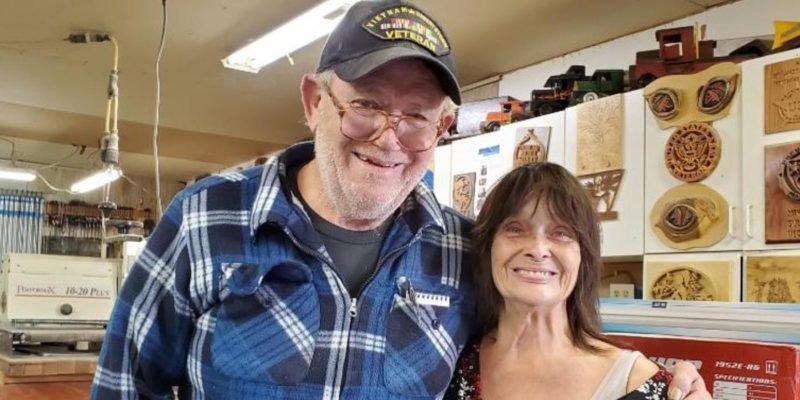 
Anyone who believes that Christmas comes but once a year has obviously never met Mike and Judy Sullivan. The couple, who recently celebrated their 50th wedding anniversary, spend most of their days making toys in their home workshop in Desert Hot Springs, California, which they then donate to local charities each Christmas season.

When Mike, a 72-year-old and 26-year-old army vet, retired, he and Judy joined a woodworking club. It started out as a hobby, but after witnessing the holiday cheer her handmade toys brought to local families, it became her new calling. Seven years later, the couple continue to churn out toys at a rate that would make Santa’s elves run for their money.

Mike Sullivan’s love of woodworking is a family tradition. Sullivan grew up in Montana. His dad was a miner. The family did not have much money, but his two older brothers were carpenters, so many of the Christmas gifts he received as a child were homemade.

“Most of the things I got were handmade toys. They were wonderful toys, I know how much I enjoyed them and I just hope the kids who have them now still do. ” told CNN.

This year, the pandemic meant that many families lacked funds to cover nonessential expenses, making the Sullivans’ mission more important than ever. Mike and Judy rose to the challenge, creating and distributing nearly 1,400 toys that included animal figures, puzzles, and trucks, to name just a few.

COVID-19 also meant they had to factor in social distancing, masking, and scheduling, but the couple persevered.

The Sullivans’ toys made it to a local kindergarten class, Coachella Valley Rescue Mission, a food pantry, and other charitable organizations, all of them free of charge (including postage for items shipped out of state to Indiana and Texas).

With their out-of-pocket costs estimated at close to $ 19,000 last year, the Sullivans launched a GoFundMe page to make sure they could keep the toys flowing. (Mike hopes to buy a 3-D laser printer so he can speed up production.)

RELATED: The old toy horse left in the trash becomes a local celebrity, and the villagers move it daily from house to house

Mike and Judy say they plan to keep making toys while they can. “We are both in good health and we can be here six to seven days a week for eight to 10 hours,” Sullivan told CNN. “It’s a lot of fun, it feels like home here, in the workshop, solving things.”

Mike admits that while they rarely get a chance to see children as they receive their gifts, just knowing that a family’s Christmas will be so much happier because of their efforts makes it all worth it.

“It makes me feel very, very warm inside. I love it, “Judy said. KESQ-TV News 3. “I would not change anything for anything in the world.”

PLUS: Teen creates dolls for children with rare diseases to help them feel included and loved

And that’s exactly the spirit that keeps Christmas alive, not just one day, but 365 days a year.

GIVE your friends this story of true generosity …