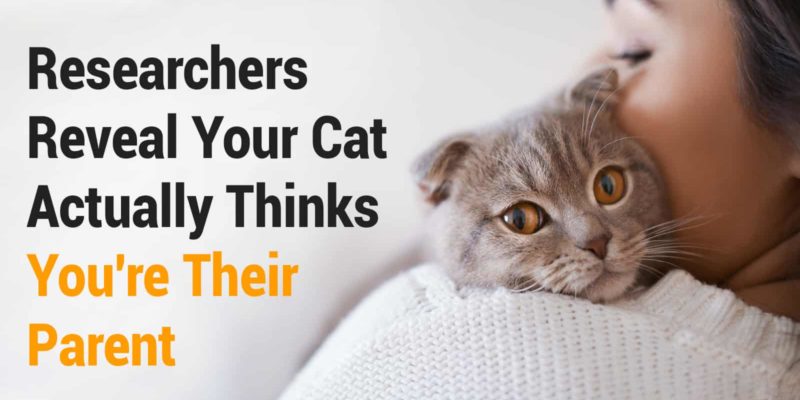 
Even though your cat may hide from you for days, sometimes a study reveals that he really thinks of you as his father. While cats form close bonds with their caregivers, they generally withdraw from visitors and even other members of the family. Anyone who has a cat can probably attest to this behavior, but you may have wondered why your pet seems to have favorites. Now studies show why our feline friends act so attached to their owners.

Despite his sometimes distant demeanor, a study published in Current biology found that felines actually form different attachment styles. Like babies and dogs, cats have socio-cognitive abilities that allow them to bond with their owners. The study found that cats can have secure or insecure bonds with their parents, which has also been observed in humans. The researchers say the findings suggest that shared bonding styles between species show similarities in behaviors.

Around the world, domestic cats greatly outnumber domestic dogs. However, although more people have catsScientists have focused on dog behavior and social cognition. Their research found that dogs form attachment bonds with humans, which could help them succeed in human settings. Previously, researchers believed that this attachment behavior was unique to dogs.

However, the pioneering study conducted recently shows that we have underestimated the ability of cats to bond with us. Like dogs, cats can live in social groups or by themselves depending on resources, human interaction, and early development. If felines grow up with humans, they will likely display the same attachment styles in adulthood. Evidence that cats share social traits with dogs and humans suggests that they have adapted to modern living arrangements.

“Like dogs, cats show social flexibility with respect to their bonds with humans,” said study author Kristyn Vitale of Oregon State University. “Most cats are firmly attached to their owner and use them as a source of security in a novel environment.”

Studies of attachment behavior previously conducted in humans involved observing children’s responses to their parents after a short period of absence. When meeting with caregivers, the researchers noted two attachment styles: insecure or secure. Insecurely attached children would engage in excessive clinging or avoidance behavior, while securely attached children would appear more relaxed. Similar tests have been done on primates and dogs, so Vitale and his colleagues wanted to test it on cats.

The sure foundation test

The safe base test involved kittens 3 to 8 months old. The researchers were able to classify 70 kittens into an attachment style, and only nine could not be classified. Among the 70 classified kittens, nearly 65% ​​exhibited secure attachment behavior and 35% had insecure attachment. In insecurely attached kittens, 84% had ambivalent attachment, 12% avoidant and 4% disorganized.

Interestingly, in human studies, around 65% of babies show a secure attachment to their caregivers. This striking similarity in the data from human and feline relationships with their humans show the adaptability of our feline friends. The researchers believe the study shows how cats have successfully integrated into modern environments by bonding with their caregivers.

However, the scientists wanted to see if a 6-week training and socialization intervention could predict the kittens’ attachment style. When they compared these cats to the control group, they found no significant differences in attachment styles at 2 months of follow-up. This suggests that although social reinforcement can help develop an attachment style, it will remain stable once established. In other words, if a feline exhibits insecure attachment, it is likely that it will maintain that behavior into adulthood.

Cats, like other domestic animals, depend on humans for their care even in adulthood. The researchers predicted that felines would display attachment behavior towards a caregiver as adults, so they decided to test this theory. 38 cats over one year old were brought in to participate in the study. Cats had a similar distribution of attachment styles to kittens: 65.8% secure and 34.2% insecure.

They wanted to rule out the possibility that different responses to stressful situations could explain differences in attachment styles. So, they looked at how often the cats meowed during their time alone to measure separation anxiety. Attachment theory says that both secure and insecure cats should show signs of distress, with little difference between the groups. However, insecure-avoidant and disorganized felines should show less distress.

As the researchers predicted, both insecure-ambivalent and confident felines showed equal levels of distress during the lonely phase. They had more signs of distress than the disorganized and insecure cats they avoided, which the scientists also predicted. so yes your cat run and hide when they see you or act distant, he’s probably unsure. If he brushes against your leg and he seems to like being close to you, he probably has a secure hold.

The conclusion of the investigation

The researchers observed various attachment behaviors, such as proximity seeking, separation anxiety, and gathering behavior between cats and humans. Differences in response remained consistent with previously determined attachment style categorizations in the studies.

In general, cats show a similar ability to form insecure and secure bonds with caregivers that was previously shown in children and dogs. 65% of children show secure attachments, while 35% display insecure attachments. In dogs, the rates are 58% safe and 42% unsafe. As we said before, both cats and humans have around 65% secure attachment to caregivers, showing similarities in their behaviors.

The researchers want to use this data to better understand how living in animal shelters can affect the behavior of cats and kittens. “We are currently looking at various aspects of attachment behavior in cats, including whether socialization and nurturing opportunities affect attachment security in shelter cats,” Vitale said.

A Nestlé Purina sponsorship for studies on the emotional well-being of dogs and cats and the National Science Foundation supported the study.

Other interesting facts about cats:

In a fascinating new study, scientists reveal that felines share attachment behaviors similar to those of dogs and humans. In fact, cats see their owners as parents because they have essentially raised them. Domesticated animals like cats and dogs display the same attachment styles as human babies due to their modern living arrangements. However, even in the wild, dogs and cats often live in packs and display similar behaviors.

Perhaps their attachment and ability to bond with humans make them such wonderful pets. Hopefully, your cat will feel well attached to you and will not immediately run behind the couch when you get home. Although, don’t be offended if you act this way; studies on feline attachment styles have just begun. Researchers cannot yet say for sure what causes cats to behave in certain ways and how various lifestyle factors may come into play.

Either way, cats and humans have a long history together, and it’s clear that we make a pretty good team.