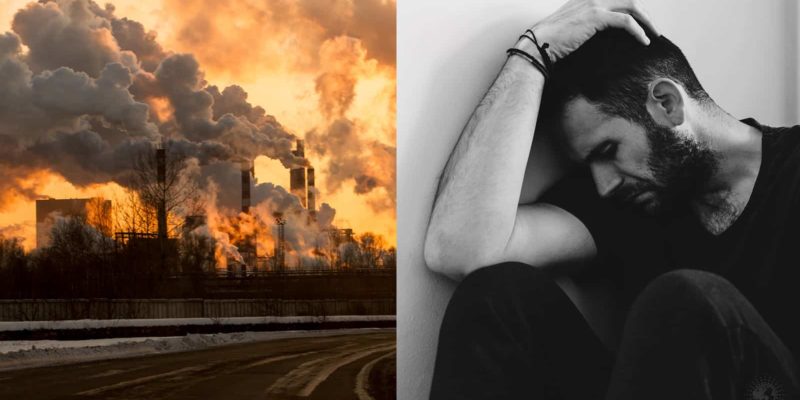 
All over the world, cases of cognitive diseases are increasing. It is an epidemic that scientists are feverishly investigating in an attempt to find causes and solutions. This is especially true because most cognitive illnesses are irreversible.

A recent advance Research suggests that markers for certain cognitive diseases were present in the brains of young people who were constantly exposed to polluted air. This suggestion combines three of the most researched topics today: cognitive diseases, pollution and climate change. Read on for more information.

The study was carried out by researchers from different universities and scientific research centers around the world. The principal investigator was Lilian Calderón-Garcidueña, affiliated with the University of Montana and the University of the Valley of Mexico. Other researchers included:

The research was carried out in Mexico City, Mexico, where 186 young people participated. The ages of the participants ranged from 11 months to 27 years.

The researchers probably chose this city because, in 1992, the World Health Organization (WHO) named Mexico City as the city ​​with the most polluted air in the world. The city government has made great strides since then to clean up the pollution, but the city is still heavily polluted. In addition, it is the capital of Mexico and has the highest population of all cities in Mexico, which makes the selection of participants more versatile.

For the study, the researchers analyzed the brainstem of the participants. They found markers for Alzheimer’s disease, Parkinson’s disease, and motor neuron disease (MND). Compared with a group of youth who lived in an area with less polluted air, the researchers found that youth in the less polluted air did not have the markers. They concluded that Mexico City residents’ long-term exposure to dangerous particles and fumes in the air is what led to the markers appearing in their brains.

The importance of the study

At this time, the scientific community has limited knowledge of the causes of cognitive diseases. Depending on the cognitive illness a person has, there may be medications to help control it, but these illnesses have no cure, and medications only delay the inevitable. Any scientific advance could possibly help clarify how to deal with this crisis.

This research points to a way to possibly prevent disease in the first place and, ironically, it is not a medical solution. The solution is environmental, which points the scientist to the problems of climate change, pollution, recycling and other environmental problems. These problems seem to be harm people as much as they are damaging the earth.

Climate change: how it is affecting life as you know it

Climate change, also called global warming, is a hot topic of debate. There are many people who try to discredit the concept, but the evidence is there. The National Aeronautics and Space Administration (NASA) is one of the most important research organizations that collects data on climate change. Its results are shocking.

Earth goes through many temperature cycles. According to POT, there have been seven cycles of glacial advance and retreat in the last 650,000 years. The latter started with the end of the Ice Age which brought the beginning of human civilization. The difference between the previous cycles and the one that is occurring now is that the previous cycles were due to natural causes because people were not present.

In addition to carbon dioxide, other greenhouse gases are:

Rising temperatures are not the only consequence of having concentrated levels of greenhouse gases in the atmosphere. What you need to understand about greenhouse gases is that it is like a blanket that surrounds the earth. That means nothing escapes, the pollution is trapped in the air. This is why many cities seem so polluted.

Another example is the results of inhaling high levels of carbon dioxide vapors. This can lead to respiratory illnesses. It also causes people to breathe less oxygen, which can damage their brain and cardiovascular system. Unfortunately, carbon dioxide makes up more than 80 percent of the greenhouse gases in polluted air.

Returning to the study, the point was that polluted air leads to cognitive diseases. This means that climate change and greenhouse gases are contributing to this problem. In fact, it could even be the root cause of the problem, although more research would be needed to verify it.

The effect of polluted air on plants

According to studies, the three air pollutants that are most harmful to plants are

nitric oxides, ozone and sulfur dioxide. Plants can absorb these pollutants which will cause changes in a physiological level. These changes can lead to stunted or mutated growth.

The parts of plants that see the impact

Plant leaves can be deficient in chlorophyll due to a phenomenon called chlorosis. This is caused by ozone. Plants need chlorophyll to photosynthesis, the process that allows them to produce food and energy from the sun. If the plants cannot photosynthesize, the leaves (and eventually the plant) will die.

Vehicle fumes and other air pollutants can delay flowering or cancel flowering. A plant that is exposed to polluted air must use all its resources to survive, so it cannot dedicate any to flowering. This is especially true for plants in urban areas where the concentration of air pollution is much higher.

Plant roots can also be affected. Greenhouse gases like sulfur dioxide can cause acid rain. This rain is then absorbed by the soil and the acidity level of the soil rises. This can cause a depletion of bacteria and nutrients in the soil that helps plants thrive.

Why contaminated plants are so important

The reason this problem is important is obvious. Humans depend on plants for food and air. Without them, people will surely die. However, not only crops on farms should be considered. A decrease in the growth of wild plants and inedible plants can upset the delicate balance of the natural food chain.

Disruption of this balance affects all living creatures. Even with humans at the top of the food chain, upsetting this balance can have devastating effects on the food supply. The animals that people eat depend on the plants that are being contaminated. This means that, without these plants, the animal population begins to decline. Even insects will have less food to eat and there are many animals that depend on insects for food.

An even bigger consideration is that humans and animals could be ingesting contaminated plants. This means that people get a direct dose of pollution into their bodies. This leads us to the study: plants polluted by smoky air contribute to the cognitive disease markers of participants in Mexico City. It is a safe bet that this is happening all over the world.

The study is one of many that points to the inevitable result of prolonged exposure to air pollution. It is a global crisis that is no longer speculation: the damaging effects are happening right now. What’s worse is that scientists speculate that it might be too late to completely reverse the damage in any significant time frame.

The best thing people can do is use studies like this to make changes for future generations. Air pollution is something that people can control. They just have to join in and just do it. Many companies and groups have led the change. Hopefully this revolution catches on before much more damage is done.

Waiting For Results? …Here’s Some Good News From Elections Around the US That We Already Know