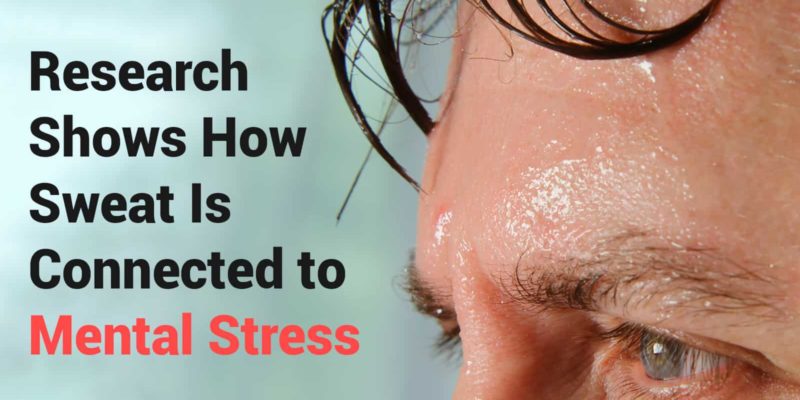 
Not only does sweat keep our bodies cool, it can also reveal underlying mental stress. Engineers have recently developed a device that can measure cortisol levels in human sweat. The portable system can help clinicians better diagnose and treat stress-related conditions such as burnout and obesity. The pioneering research was published in the journal Communication materials.

Until now, researchers and scientists have not been able to measure stress in a quantifiable way. However, the wearable sensor developed by engineers at EPFL’s Nanoelectronic Devices Laboratory (Nanolab) and Xsensio will change that. Patients can wear this device directly on their skin and it will continuously measure cortisol levels. detected in your sweat. Cortisol, the main biomarker of stress, can become dangerous to human health if levels remain high over time.

It’s all in the cortisol.

Our the adrenal glands produce cortisol, a steroid hormone, cholesterol. The adrenocorticotropic hormone (ACTH), produced by the pituitary gland, regulates the secretion of cortisol. Cortisol helps with various functions in our body, such as regulating metabolism, blood pressure, and blood sugar levels. It also affects our immune system and cardiovascular health.

Although cortisol is necessary for our survival, it becomes a problem if the levels remain high in the long term. Cortisol increases during stressful or life-threatening situations to prompt us to take action. However, in today’s world, it generally runs in overdrive, sending signals to our brains even when there are no direct threats. When this hormone floods our bodies, we naturally want to run, freeze, or fight imminent danger.

“Cortisol can be secreted on impulse: you feel good and suddenly something happens that puts you under stress and your body begins to produce more hormone,” says Adrian Ionescu, director of Nanolab.

Cortisol production generally corresponds to our circadian rhythm, increasing in the morning and decreasing at night. However, in people with high levels of stress, these levels are altered.

“But in people with stress-related illnesses, this circadian rhythm is completely lost,” says Ionescu. “And if the body produces too much or not enough cortisol, that can seriously harm a person’s health, which could lead to obesity, cardiovascular disease, depression or exhaustion.”

How the wearable device can detect cortisol in sweat

Blood tests can provide accurate information about a person’s cortisol levels. However, doctors also use sweat, urine, and saliva to measure stress hormones. The research team decided to take measurements using a the person’s sweat, with the help of the small portable sensor they developed.

The device consists of a transistor and a graphene electrode, high sensitivity and very low detection limits. Aptamers, short fragments of single-stranded DNA or RNA that bind to specific compounds, make graphene functional. The aptamer in the device has a negative charge; it immediately captures the hormone when it detects cortisol.

This results in the strands folding in on themselves, bringing the charge closer to the surface of the electrode. The device then senses the load and can therefore measure cortisol concentrations in a person’s sweat.

This is the first wearable device capable of detecting cortisol levels consistently throughout a person’s circadian cycle.

“That is the key advantage and innovative feature of our device. Because it can be used, scientists can collect objective, quantitative data on certain stress-related illnesses. And they can do it in a non-invasive, precise and instantaneous way over the entire range of cortisol concentrations in human sweat, ”says Ionescu.

The engineering team tested their system on Xsensio’s proprietary Lab-on-SkinTM platform. They will then give it to healthcare workers to test with patients. Esmeralda Megally, CEO of Xsensio, said: “The joint R&D team of EPFL and Xsensio reached an important R&D milestone in the detection of the hormone cortisol. We look forward to testing this new sensor in a hospital setting and discovering new insights into how our bodies work. “

The team established a bridging project with Professor Nelly Pitteloud, Head of Endocrinology, diabetesand metabolism at the Lausanne University Hospital (CHUV). Your staff will be able to test the portable cortisol monitoring device on human patients.

The trials will include healthy people and people with Cushing’s syndrome, Addison’s disease, and stress-related obesity. Cushing’s syndrome occurs when the body makes too much cortisol; Addison’s disease is when the body makes less cortisol. Engineers believe their device will greatly improve understanding of the link between physiological stress and cortisol secretion.

The link between sweat and mental stress

They also believe that the system can provide a greater understanding of how mental stress affects cortisol production.

“For now, they are assessed based solely on patients’ perceptions and mental states, which are often subjective,” says Ionescu. “So having a reliable portable system can help clinicians objectively quantify whether a patient is suffering from depression or exhaustion, for example, and whether their treatment is effective. Also, doctors would have that information in real time. That would mark a big step forward in understanding these diseases. “

In the future, the team hopes its technology will become mainstream, helping people track stress levels in real time.

“The next phase will focus on product development to make this exciting invention a key part of our Lab-on-SkinTM sensing platform and bring stress management to next-generation wearable devices,” says Megally.

Before the Nanolab engineering team created this revolutionary invention, doctors couldn’t quantify stress levels. Now, they can accurately measure stress levels in the sweat of patients with the wearable device. The team showed how the system could detect stress in a person’s sweat, tracking their cortisol levels during their circadian cycle.

So far, they have tested their technology on Xsensio’s proprietary Lab-on-SkinTM platform. They also gave it to the Lausanne University Hospital (CHUV) for staff to test with patients. In the future, the team hopes to integrate its technology with wearables, helping thousands of people track and control stress levels.

Why Do People Fear Germs? 10 Symptoms of Mysophobia