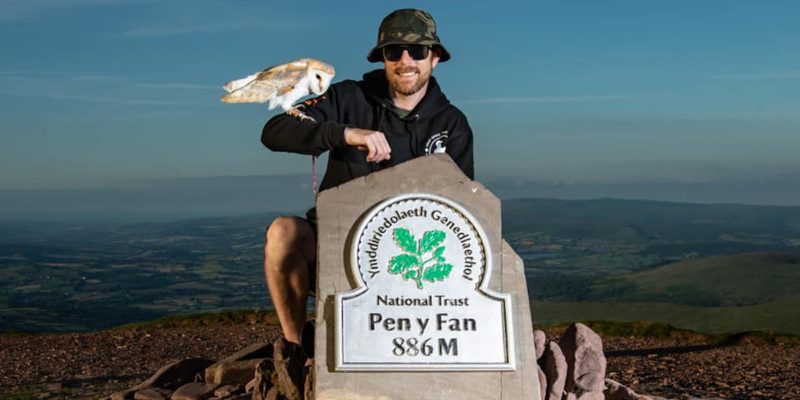 
It is not every day that you see a man and his owl climbing a mountain.

But this is not just any owl. Louie is an emotional support animal.

Jaylo Miles and his beautiful Barn Owl with PTSD have the most incredible bond.

Together they have a mission to help raise awareness about mental health and people struggling with PTSD (Post Traumatic Stress Disorder) and associated stigma.

A Swansea, Wales-based photojournalist Joann Randles recently joined the unlikely duo for a hike to the top of South Wales’ highest peak, Pen-y-Fan.

He approached Welshman, who lives in Cardiff, to see if he would allow Joann to join him on one of his adventures with Louie.

“People will never know how special Louie is, not just to me, but also to the guys I let hug him,” says Jaylo. “That special moment of love!”

Jaylo created a Facebook page called Many falls, time to get up, as a safe and uplifting community where people can learn about their battle to overcome PTSD, and readers can help inspire others.

The father of three wrote: “I have built this page out of a desperate battle with my own mental health and suicidal thoughts in hopes of making a difference and leaving a legacy to create and inspire.”

Jaylo and Louie, and another supporting owl named Oscar, are now familiar faces in Cardiff.

They encourage others to join them in challenges and group meetings, so that they too can take the positive steps to overcome their fears.

“CPTSD, PTSD, mental health sucks, but the journey I’m on will show the way for those in their time of need. Be strong, be honest, be yourself! “