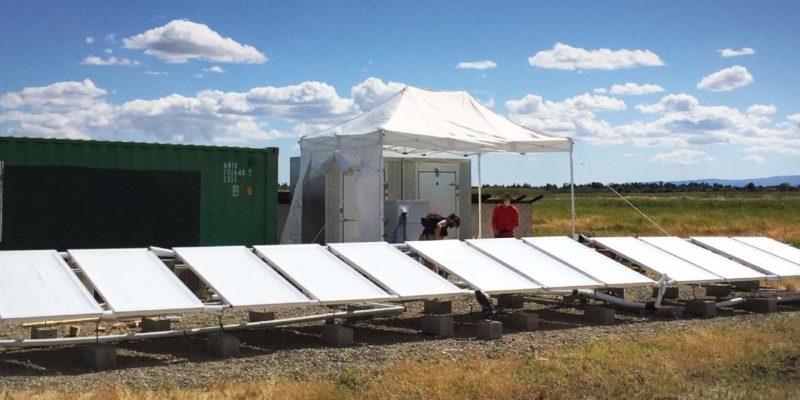 
If in mid-summer you were to go up to the top of the Grocery Outlet supermarket in Stockton, California, and put your hand over the strange shiny black panels you found there, you would be surprised to find that they were as cold to the touch as a fuse box in the basement. .

Installed by a company called SkyCool Systems, they are the first of a new generation of cooling technologies that radiate heat through the atmosphere, reducing the temperature of the nearby air by approximately 10 ° F.

Radiative cooling is what happens when electromagnetic waves that we call heat leave an object. It is the phenomenon that puts you at risk of heat stroke in the desert during the day and hypothermia at night; the absorbed heat evacuates the landscape at dusk, and without any trapping moisture, it exits through Earth’s atmosphere into outer space.

A UCLA scientist reasoned that if a certain spectrum of warm rays were radiated into the atmosphere during the day, it would cool what was left, potentially offering an alternative to traditional air conditioning.

It is estimated that 7% of global greenhouse gas emissions are generated through cooling systems, both for homes and transportation, but as global temperatures continue to rise, the use of cooling systems is expected for homes and businesses will triple in the coming years.

SkyCool radiative panels It can absorb all the heat-producing sunlight from the sun, and instead of sending it back into the cauldron of swirling gases that are warming the planet, it expels it into space.

Aaswath Raman, a materials scientist at the University of California, Los Angeles, found that radiative cooling technologies like special reflective paints and panels had been investigated before, but later abandoned as impossible.

The idea was that if something could radiate heat even in broad daylight, it could save thousands of dollars in cooling costs. Raman decided to submit a funding proposal to the Advanced Research Projects Agency-Energy, or ARPA-E, a branch of the Department of Energy.

Despite the blanket of material and all the water vapor and CO2 that make up the atmosphere, infrared radiation between 8 and 13 micrometers long passes through it as if it were not there, so Raman aimed to create a film that reflect visible light. and that it radiated infrared light that can leave the atmosphere, ensuring that the heat it disperses does not become an alien problem.

With colleagues from the Stanford engineering department led by Shanhui Fan, he created an ultra-thin film, which he says could be produced in rolls one meter long by two meters wide, made from silica, glass and hafnium dioxide, a coating agent. . used in the optics industry.

Placed on a rooftop, They found your prototype panel it got warmer when shielded from the sun’s rays, a counter-intuitive reaction to what one would expect, because the radiation was impeded by the material that creates the shadow. Also, in the hot summer sun, the panel was cool to the touch.

If placed on the hood of a car, the film would not only reflect sunlight, but would radiate some of the heat from the engine; placed above where water pipes run through a building, it would cool the water in the building, reducing the load on air conditioning systems.

After a trip to Mumbai in India revealed the speed at which the domestic A / C market is growing, Raman needed to ensure that the panels and film were cheap enough to be used in developing countries near the tropics. , where they are most needed.

In Stockton, the Grocery Outlet supermarket spent $ 40,000 per year on refrigeration between its freezer islands and the deli. The SkyCool panels are placed on the roof and are now saving around $ 5,800 in costs per year.

Washington Post reports that Raman and SkyCool Systems have gone looking for a grant to replace all the air conditioners in a school as part of a project to see if their specialty film can itself be the primary cooling agent for a building, while National Geographic adds that some scientists have created models that suggested If only 1.5% of the world were covered by these panels, and if they could be maintained for a long enough period, it would reflect all the additional heat created by the climate crisis.

UPDATE your friends’ news with positive news by sharing this story …