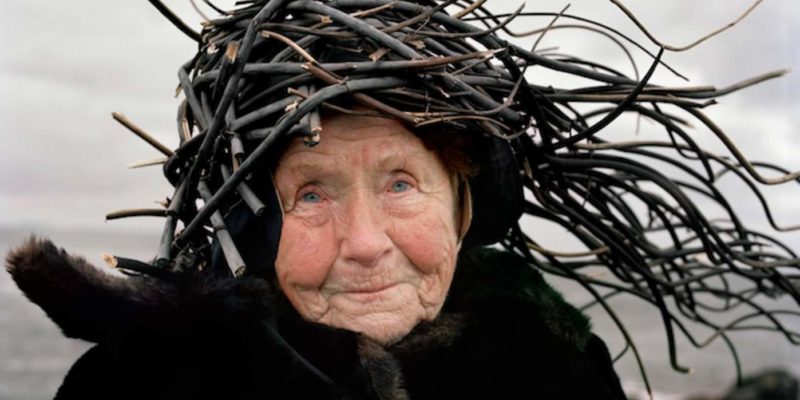 
Have you ever looked at a nature photo of an animal hiding in plain sight and had a near impossible time trying to separate the creature from the background?

Camouflage (also known as cryptic coloration) is an adaptive mechanism that helps organisms blend in with their environment. It can be a life-saving form of self-defense. But when the camera lens captures older people as integral and interconnected parts of the landscape they inhabit, it can also become a life-affirming revelation of self-expression.

Eyes as big as saucers, a collaborative conceptual photography project between Finnish and Norwegian artists Riitta Ikonen and Karoline Hjorth began as a riff from traditional Nordic folklore.

Ikonen, who had been looking for a way to reinterpret the stories of trolls and magical creatures, was intrigued by the series of photos of Hjorth’s Norwegian grandmothers and approached her.

After the two connected, the focus of the project evolved. “At the beginning, we tried to illustrate certain phenomena: folklore, stories, figures of myth,” Ikonen told the BBC.

But the couple soon realized they were into something that spoke to the bigger picture about the ways in which the elderly are seen, or perhaps more accurately, unseen and valued by society; one that might have a deeper universal meaning than a simple reinvention of regional mythology.

Throughout history, the elderly have traditionally been revered for their expertise and wisdom. Now, however, older people often admit that they feel obliterated from the larger cultural conversation. But, by incorporating older models as quasi-sculptural elements into their compositions, Ikonen and Hjorth have created a body of work that takes seemingly invisible individuals and makes them the center of attention.

Featured models are imbued with an organic and surprising connection to the environment. The result? Each stunning portrait reflects a recognized and revered personal narrative rather than a discarded and forgotten life story.

“We just try to work with whatever the people we interview bring, wherever they are,” Hjorth told the BBC.

“We could be in Paris, and you could be at an opera evening and there could be an old lady dancing, the last person on the dance floor,” Ikonen said. CNN style. “And you just think: Who is this fascinating person that I have to meet? You go up to them and ask them: ‘Who are you and what will you do tomorrow?’ “

For those fascinating people who embrace the visionary photographers of the challenge, most of the time, that means finding themselves in communion with nature in a way they have never imagined and ultimately being celebrated for posterity in a way that never before. they would have dreamed. .

SHARE this beautiful art with friends on social media …

Wise Woman Shares an Inspiring Message About Knowing Your Self-Worth