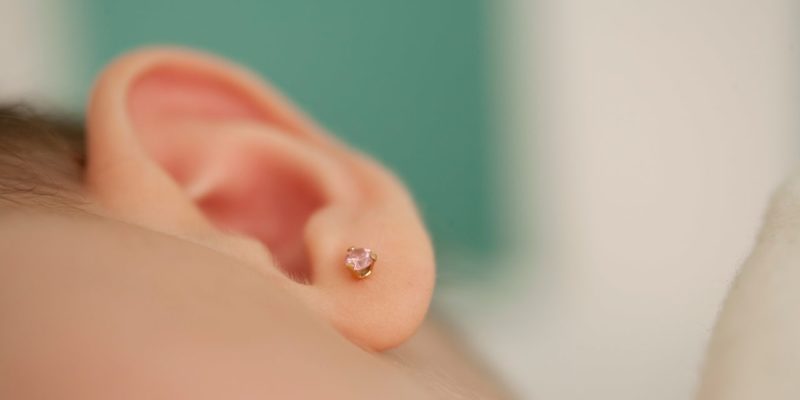 Growing up, not having my ears pierced often left me feeling like the odd one out. In Puerto Rican culture, many parents pierce their children’s ears shortly after they’re born. It was often a rite of passage, and being without my own pair seemed to confuse some people. I was often asked why my mother didn’t pierce my ears when I was younger, and I never exactly had an answer for them; it was just a decision my mother chose not to make for me. Sometimes, I would flip the question back on them, asking why they chose to make that decision for their child. The most common answers were that parents didn’t want their baby girl to be mistaken for a boy, or that it was simply tradition.

The (sometimes literally devastating) gender reveals that have recently been shaking up the news cycle have brought me back to musing over this less-obtrusive way that some parents choose to let the world know their baby was assigned female at birth. “This persistent and compulsory coupling of feminine and female is, in part, what leads to ear piercing as a visible signifier of femaleness itself,” Sasha T. Goldberg, a doctoral candidate and research assistant in gender studies at Indiana University Bloomington, tells me. Tying femininity, or lack thereof, to an ear-piercing seems to me like a heavy expectation to put on a child that has no say in the decision otherwise. As Jessany Maldonado, an associate instructor and graduate student at Indiana University Bloomington, specializing in the studies of Black sexuality, more plainly puts it: “If you’re trying to push a ‘gendering agenda’ …trying to force other people to construct your child as A or B, then there’s some inside insecurities that [you] need to work out.”

As my fellow millennials and even younger gen Zers start having our own kids, some of us find ourselves having to parse two potentially opposing views. Many of us understand gender to be a spectrum and not something that can always be accurately assigned at birth. Many of us also come from families where piercing a baby’s ears, especially if they’re a girl, is simply tradition. As it’s often a part of our culture, it’s often expected that we’ll be eager to continue the trend when we become parents. “Getting your ears pierced as a woman of color is seen as a rite of passage in the Black community,” says Taylor Gibbons, 27. “It’s so ingrained in older Black women and men that when I don’t have earrings in my ear, I’m called out and scolded for it even as an adult.”

The Culture of Piercing

This was a common theme among most of the people I interviewed for this piece: More than having a hyper-specific religious or cultural reasoning for piercing a baby’s ears, their parents pierced their ears mainly because everyone they knew did too. (It’s worth noting that the American Academy of Pediatrics says there is “little risk” associated with ear piercing, regardless of age.)  “My parents pierced my ears when I was a baby, but they never gave a specific reason why. When I ask, they say ‘because we did,'” Justice McNeil, 21, says, noting that they didn’t do the same for her brother, who later chose to pierce his ears when he was about nine or 10.

“It’s pretty uncommon for Indian people, especially for a girl, to not have your ears pierced,” says Aarati Akkapeddi, 27. “I think there is also a religious significance for Hindus…I know there are all kinds of theories around Ayurvedic pressure points in the body. I’m sure my parents didn’t think about it in such detail, but piercing your baby’s ears was definitely normalized in their social circles.”

Pink doesn’t always signify femininity, nor does blue signify masculinity — and anyone can pierce their ears.

Historically, cultural ties to piercing are common across cultures, even if they might not be the explicit reason many parents pierce their children’s ears today. For instance, ear piercing, also known as karnavedha in Hinduism, is one of the 16 sanskar rituals that mark stages of life and signify cultural heritage and upbringing. Usually, children will have their ears pierced after their birth in a karnavedha ceremony that celebrates this symbolic practice.