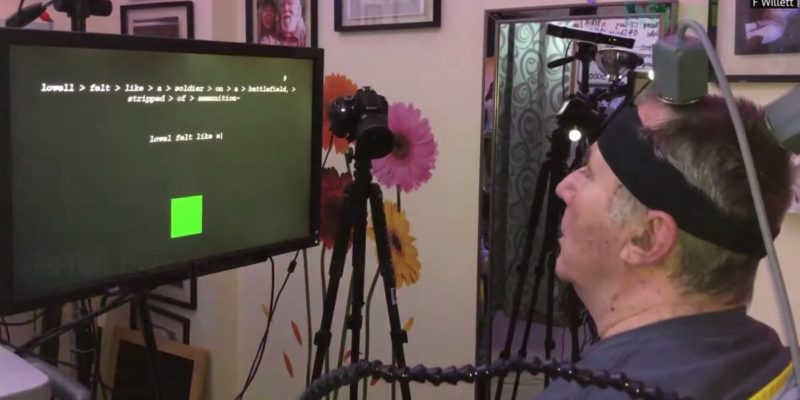 
A man paralyzed from the neck down has gained the ability to type words with his brain as fast as the average smartphone user, according to a new study.

This “mind writing” was done through a science fiction sounding brain-computer interface (BCI) that collected neural signals and fed them into an algorithm that translated them into letters.

The secret to success, and why this particular BCI was able to produce words at such a rapid rate than other BCIs in the past, was that it tracked the patient’s brain signals, known as T5, as imagined by writing them with a pen, a skill that is so deeply imprinted on our motor skills system that it remains for years evidently after paralysis.

The man was 65 at the time of the study, but it was in 2007 that he suffered his spinal cord injury.

“With this BCI, our study participant achieved typing speeds of 90 characters per minute with raw accuracy of 94.1% online and accuracy greater than 99% offline with general purpose autocorrect,” the authors wrote, whose article can be read in Nature. “To our knowledge, these write speeds exceed those reported for any other BCI, and are comparable to typical smartphone write speeds of individuals in our participant’s age group. “

MORE: He designed a mountain bike to bring adventure back to people with disabilities, like himself.

Made by Stanford University and the Howard Hughes Medical Institute, the most common mistake the machine made was with similarly shaped lowercase letters such as ‘r’, ‘h’ and ‘n’.

At first they allowed the patient to write each letter as he would by hand, and finally they went on to ask him questions, which allowed him to write his answers, which he liked very much. they said NPR.

Some BCIs and other machines that are designed to allow paralyzed people to type normally follow eye movement, which is often retained even in the most extreme cases of paralysis, such as the famous locked-in syndrome patient Jean-Dominique Bauby. Bauby is known for writing The diving bell and the butterfly, published in 1997, which he composed entirely through the painstaking process of blinking at an assistant’s selection of the correct lyrics.

Stanford had done other trials with different BCIs before, in which they used eye monitoring equipment, but found it required great attention and concentration on the part of the user.

RELATED: Scientists demonstrate the success of a possible ‘EpiPen’ in preventing paralysis from spinal cord injuries

The new BCI is not yet developed enough to be called a prototype, which means that it will probably be years before more paralysis victims can regain their ability to communicate. However, this also means that the room for refinement is much greater, explained one scientist, speaking with CNN.

SHARE this groundbreaking research with friends on social media …

5 Habits That Prevent You From Attracting Love